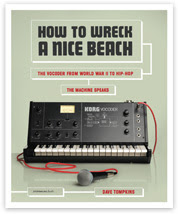 This recent piece in the Montreal Mirror by Erin MacLeod about Celine Dion's popularity in Jamaica has a quick comment at the end of the piece by Carl Wilson. And it also reminded me that I was recently reading Dave Tompkin's incredibly entertaining history of the vocoder, How To Wreck a Nice Beach, when I came across the following quote. It's an interesting parallel to Garnette Cadogan's quote about the Celine Dion Effect in the Jamaican ghetto from Carl's 33 1/3 on Celine. See below:
______________________________
From How to Wreck a Nice Beach:
While Good Fred’s Accentuator would flourish with Ice Cube and khaki in the Comptonian future, the vocoder and the Uncle Jamm parties couldn’t survive as venues grew increasingly nervous about gang insurance. Egypt remembers the shift. “The gangs would have one fight and say, ‘I’ll see you at the next Uncle Jamm’s Army party,’ and then have another fight at the next one. It got so they’d say, ‘If they’re coming, we ain’t coming.’ Ninety percent of the gangsters came to have fun. It was the ten percent who couldn’t get a girl. They were the ones starting problems. There were so many women there—women outnumbered us five to one. This was at the Sports Arena. Everyone was selling dope and making money back then. Gangsters with money—no problems. But play Michael Jackson—that will make you fight. The Rolling 60s Crips would shoot up every-fucking-body. Slow songs and ballads make the gangsters fight. No room for Michael Jackson. Sorry, Mike.”
______________________________
From Celine Dion's Let's Talk About Love: A Journey to the End of Taste:
One of the most astounding tales of Céline’s global flexibility comes to me from Jamaican-American music critic Garnette Codogan, who says she may be Jamaica’s most popular non-native musical figure. And not just for grandmas.

“I wish I could give you an explanation beyond Jamaicans’ love for saccharine tunes, but that may be satisfactory enough,” Codogan wrote me.

"And the places she turns up in Jamaica are all the more curious. I remember being at sound-system dances and hearing everyone from Bob Marley to Kenny Rogers (yes, Kenny Rogers) to Sade to Yellowman to Beenie Man being blasted at top volume while the crowd danced and drank up a storm. But once the selector (DJ in American parlance) began to play a Céline Dion song, the crowd went buck wild and some people started firing shots in the air. . . . I also remember always hearing Céline Dion blasting at high volume whenever I passed through volatile and dangerous neighborhoods, so much that it became a cue to me to walk, run or drive faster if I was ever in a neighborhood I didn’t know and heard Céline Dion mawking over the airwaves.

I sometimes shared this little anecdote with other Jamaican friends, only for them to laughingly comment that they had a similar practice. The unofficial rule seemed to be, “If you hear Céline Dion then you’re in the wrong place.” That’s not to say that roughnecks (as gangsters are also called in Jamaica) are the only ones who appreciate and publicly show their love for Saccharine Céline. It’s just that, for some reason, they show her more love than just about any other group."

Codogan asked around, including a few roughnecks, and the reason given was, “to quote one fellow, ‘Bad man have fi play love tune fi show ’dat them a lova too.’”
Posted by John Mark at 9:01 AM

Somebody should write a 33 1/3 book about a similar phenomenon among Mexicans for Morrissey.

I don't think the Mexican love for Morrissey has anything to do with violence, though, does it? Just a musical/cultural affinity and old fashioned good taste...