Moody and Lehman discuss Bob Dylan and The Band 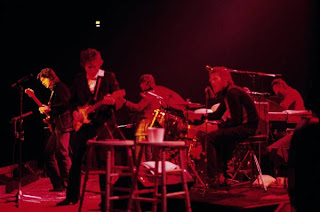 Next Wednesday, an exciting event is happening in the East Village.
From 14th Street Y's website:

After a weekend of successful events last month, the 14th Street Y will continue its celebration of Bob Dylan and the Band with an exciting event, in partnership with improv-writing website QuickMuse and JBooks.com. The evening will feature an interactive discussion with novelist Rick Moody and poet David Lehman on the topic of Dylan and the Band and their response to a particular snapshot of the band performing with Cher. (See above photo)

Here’s a little back-story to this exciting event: William G. Scheele, who was the equipment/stage manager for The Band and Bob Dylan from 1969 to 1976 and a photographer whose work is currently on exhibit at the 14th Street Y’s LABA Gallery, snapped a red-tinted picture of Dylan and The Band jamming with, of all people, Cher. Cher! It was an extremely arresting photograph – were they playing a wedding gig in Hell? – and so Ken Gordon, founder of the improvisational-writing website QuickMuse and editor of JBooks.com, the Online Jewish Book Community, thought it would make for a great session of improvisation. So he sent it to novelist Rick Moody and poet David Lehman, and asked them to improvise written responses.

At the January 19th event, these two accomplished artists will appear onstage to discuss Dylan, their QuickMuse writings, and whatever else pops up in the course of the evening, live in front of the audience!

I must be blind...but I don't see Cher in that photo. Can someone point her out to me??

Am I missing something here? Is this post a joke? Where's Cher?