Some of you may be interested to learn about a book we've just published in the US (it'll be out in the UK next month). It's called Noise/Music: A History, by Paul Hegarty. You can buy it from Amazon here, and below is a review of the book from Publishers Weekly.

Can silence be "noisy"? Why do punk bands downplay their musical abilities? What do 37 minutes of ceaseless feedback and squawking birds tell us about the human experience? Calling upon the work of noted cultural critics like Jean Baudrillard, Georges Bataille and Theodor Adorno, philosophy and visual culture professor Hegarty delves into these questions while tracing the history of "noise" (defined at different times as "intrusive, unwanted," "lacking skill, not being appropriate" and "a threatening emptiness") from the beginnings of 18th century concert hall music through avant-garde movements like musique concrete and free jazz to Japanese noise rocker Merzbow. Ironically, it is John Cage's notorious 4'33", in which an audience sits through four and a half minutes of "silence," that represents the beginning of noise music proper for Hegarty; the "music," made up entirely of incidental theater sounds (audience members coughing, the A/C's hum), represents perfectly the tension between the "desirable" sound (properly played musical notes) and undesirable "noise" that make up all noise music, from Satie to punk. Hegarty does an admirable job unpacking diverse genres of music, and his descriptions of the more bizarre pieces can be great fun to read ("clatters and reverbed chickeny sounds... come in over low throbs"). Though his style tends toward the academic (the "dialectic of Enlightenment" and Heidegger appear frequently), Hegarty's wit and knowledge make this an engaging read.

Also, it has a super-cool cover. 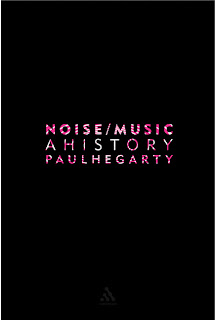 Ordered this right after I read this post - almost as excited for it as I am for the If You're Feeling Sinister book :-)