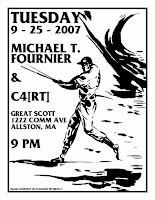 Mike Fournier will be talking about the Minutemen on Rich Ladew's "End of Radio" show on WMUA out of Amherst, Mass. this Thursday (9/13) sometime between 8-10pm EST. You can stream it live!

Also from Mike: "My friends in Campaign for Real-Time are doing a month-long residency at Great Scott in Allston before they go to L.A. to record some more songs. The residency, titled "Making Mondays Tuesdays," features a bunch of bands, local wackos, and a certain jackass who's going to lecture the crowd on the role of the Black Panther Party in contemporary punk. Flyer is attached."
Posted by John Mark at 10:35 AM