If You're Feeling Sinister

Another of the books we'll be publishing in the autumn of this year is Scott Plagenhoef's fascinating take on Belle & Sebastian's second album, If You're Feeling Sinister.

Here's an extract from near the start of the book. Together with a very early promotional photo of the band... 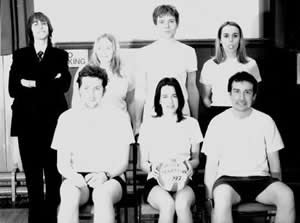 Murdoch had taken to songwriting in order to engage with a world outside of home, eventually recording demos with bassist Stuart David, a like-minded musician he’d met at a government-training program called Beatbox. Murdoch quickly met a series of other musicians through social and musical circles in his hometown of Glasgow, and they agreed to help with this Stow project: Guitarist Stevie Jackson (an open-mic host whose former band the Moondials had an EP issued on the Stow course’s label the previous year), drummer Richard Colburn (a former semipro snooker player who nominated Murdoch’s songs for the Stow honors), and keyboardist/organist Chris Geddes (the flatmate of one of Murdoch’s friends). Murdoch also knew a talented trumpet player, Mick Cooke, who had contributed to some of his demos and was willing to help out once again. And now he had met Campbell, whose first name had been rattling around his brain since the summer.

The single Murdoch was to record for Stow College—to be issued by Electric Honey, a label run by its music business course—turned into a full album. Course instructor and former Associates multi-instrumentalist Alan Rankine rightly determined that Murdoch had enough good material to record a full LP and could do so if they could get it all done in three days, the studio time allotted for the single. Murdoch rose to the challenge, leading his group of musicians—most of whom had at best a passing familiarity with one another, or with Murdoch himself—through the recording of 10 tracks. Putting the songs down in the order they’d appear on the record and mostly completing them in just a few takes, the recording process was smooth and painless, a rapid transfer to acetate of the sounds and arrangements that for months and years had rattled around Murdoch’s heard. The album, Tigermilk, was issued on vinyl in a one-time-only series of 1,000 copies on June 6, 1996.

Five months later, the group—now including multi-instrumentalist Sarah Martin—recorded a second album, If You’re Feeling Sinister, in much the same manner. Having signed to upstart London-based label Jeepster Records, the band still worked from a shoestring budget, creating Sinister in barely more than a week. Like Tigermilk, this collection of songs were again performed by a group of players who—despite a growing familiarity with one another, and the contributions of a producer, Tony Doogan—were primarily charged with the duty of re-creating Murdoch’s musical vision, with the songwriter dictating his hopes for his songs to his new colleagues.

Belle and Sebastian’s early album covers (from Tigermilk through, to date, 2006’s The Life Pursuit) and their initial single artwork are monochromatic homage to the iconic Smiths sleeves—one of the only overt references they made to the band they’d become most often compared. Few of the Smiths’ images, each of which was selected by Morrissey and featured a different artist bathed in a single color scheme, carried specific, literal meanings—though that didn’t prevent fans from searching for them. Instead, these sleeves provided a window into Morrissey’s intellectual and cultural world, highlighting French film icons Alain Delon, Jean Cocteau, and Jean Marais, early 1960s British cinema stills from films starring, written, or directed by Tony Richardson, Albert Finney, Shelagh Delaney, and Terence Stamp, and gay icons Truman Capote and Candy Darling.

Belle & Sebastian’s cover stars weren’t celebrities or cult heroes, they were friends and acquaintances no more glamorous than the people expected to be buying the records. The first, Tigermilk, is a literal reading of the album title, featuring a photo of Stuart Murdoch’s roommate Jo topless pretending to be breast-feeding a plush toy tiger. It’s a clumsy image but it encapsulates the playfulness of that record and its blend of sexuality and emotionally stunted yet self-aware infantilism. It’s the most stylized and artificial of the band’s sleeves and it fits the slightly surreal look of the group’s early press photos, which included keyboardist Chris Geddes ironing a tartan, cellist Isobel Campbell hiding behind a surgical mask, bassist Stuart David crouched over a fallen nun, and a young, jean-jacketed Alex Kapranos, now of Franz Ferdinand (never of Belle and Sebastian), posed on a street corner with a modest-looking bicycle.

“At the start it was good to use Jo, because that was the outset of the band and they weren’t comfortable about having their pictures taken,” Murdoch told Select of the group’s preference for offbeat PR snapshots. “I think it’s difficult to be intuitive at the same time as being guarded.”

Despite crediting “the band” for this decision, Murdoch made his dislike of press photos even more plain to Melody Maker: “If you think you have to pose and see your own sickening face then you’re in a bad way.”

Although he never posed for photos, at first Murdoch did speak to the press, revealing himself to be charming and witty, joking that he was going to sew a list of his desert-island discs “into the lining of my underpants, just in case I get run over and they have to read it out posthumously.” He was poking fun at his new status as a pop personality of note, but he was also jabbing at the rote content of and lack of imagination in most musician interviews. Tending to focus on influences, inspirations, and writers floating their theories about an artist’s work (and I’m guilty of having done all three myself), they’re often akin to film press junkets, repetitive and dull for the subjects themselves.

Early on it also became clear that Murdoch was going to be pigeonholed as a quintessential student type, despite his relatively advanced years (he turned 27 in 1996, the year both Tigermilk and Sinister were released). After his initial frustration over the quality of these interviews and the copy they produced—usually only a few questions and answers were printed, almost always about religion or the songwriter’s supposed obsession with childhood—Murdoch decided in 1997 to stop doing them altogether, turning down opportunities such as a five-page cover story in fashion/music magazine The Face. The rest of the band eventually followed his lead. “It was a combination of things,” Murdoch told NPR’s Terry Gross in a 2006 interview on her “Fresh Air” program of this decision. “It just seemed at some point that it was easier not to do them. You know, being young and paranoid. I was somewhat disappointed when we started speaking to the British music press right at the start of the group. They seemed to want to control what we were. They seemed to have a problem with us simply doing what we did. It was like they wanted to mold us, and I got rather paranoid about this. And so it just seemed easier to switch off.”

In an August 1997 Melody Maker interview just before the press embargo, Murdoch’s frustration, both with the interview process and the armchair psychologists holding the tape recorders, was beginning to show: “The band is really not about me. The interesting things happen when it goes beyond me. I do like talking. I like meeting new people and chatting away and I like talking about the band. But I am sitting here desperately trying to deflect all the questions.”

In this case, the interviewers—the piece is credited to Ian Watson and longtime Belle and Sebastian champion David Hemingway-—were sympathetic: “Stuart isn’t being difficult here,” they concluded. “Just true to himself and his ideals.” As the press requests continued to be rejected, this romantic notion of the band’s intentions faded.

The ease with which Murdoch could ignore media requests was a luxury many up-and-coming artists didn’t enjoy. Having entered the marketplace with a readymade narrative—university course unearths poet of the disaffected, as the more flowery ledes went—and armed with an incredible batch of songs, the group enjoyed particular advantages. It also had a record label willing to work with the nascent internet in order to cut through the traditional media, and was being embraced by national radio in the UK, having recorded a pair of 1996 BBC sessions.

Belle and Sebastian’s record label, Jeepster, were naturally convinced the group could do more, especially since it was already faced with a star signing that, mindful of ripping off its fans, refused to release singles in order to promote its albums, and scarcely toured.

When the group did perform live in the mid-90s, it made every effort to put on an event rather than something so typical as a gig. As a result, these shows were often small and ramshackle affairs held at offbeat locales such as libraries and churches rather than clubs. This decision made it difficult for curiosity seekers to stumble upon the band. The group’s hometown, Glasgow, has a healthy and supportive music scene, but punters who may have been willing to stop into clubs such as Nice ‘n Sleazy or King Tut’s Wah Wah Hut to see who was playing on a particular night would be highly unlikely to do the same at, say, Mitchell Library. It was akin to punk basement or pub shows, a harkening back to the time when underground or indie music was something discovered and investigated by the curious rather than something branded in the music press.

Stuart David summed up the band’s ambivalence about the whole thing in a 1999 band-made documentary called Up Our Own Arses: “The record company have said that they can’t see it going past the number of people who buy the records just now without us going a lot more promotion, and I think it won’t go beyond the numbers just because of the type of band it is.”

Hmm, looks good. But I wonder when the book for Pretty Hate Machine is going to come out?