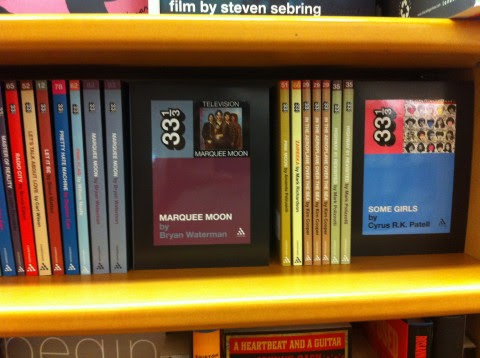 Kicking things off in this installment is our own David Barker...
David Barker
This afternoon’s installment in our guest playlist extravaganza comes from the 33 1/3 series’ mastermind, David Barker. David, a UK native with a PhD in English from Newcastle University, is U.S. Editorial Director at Continuum Books in New York. He conceived and launched the 33 1/3 series in 2003. (Here’s a 2005 interview conducted by Daphne Carr, who six years later is the author of the series volume on Nine Inch Nails.) Cyrus and I owe David a special debt for accepting our proposals and keeping our volumes on track. Thanks, too, for participating in this playlist series.
Peter Kay
This morning’s list comes from our friend Peter Kay, who describes himself as a NYC native who works in book publishing” and adds: “He wishes he had gone to see New Order at the Ukrainian National Home instead of Marshall Crenshaw at the Pier.” Follow peter on twitter @pkay225
Jonathan Williger
This afternoon’s installment in our NYC-themed playlist marathon comes from Jonathan Williger, WNYU and #wny11 alum and founder/proprietor of the Brooklyn-based label Blackburn Recordings. (Pelly Twins interview from early 2010.) He writes: “I was trying to write little blurbs about each one and then remembered I’m not a music writer. hopefully this is a nice change of pace.” Follow Jonathan on Twitter at @blackburnrecs
Bart Plantenga
This morning’s list comes from Bart Plantenga, host of the Amsterdam-based radio show Wreck This Mess (formerly on WFMU). He’s also author of the (NYC set) novel Spermatogonia: The Isle of Man and another novel, Beer Mystic, which he describes as being “about beer and mysticism in NYC c. 1987 and is currently going around the world excerpt by excerpt via the world’s longest pub crawl.” Follow him on Twitter @bartplantenga.
Jen Pelly

Our Friday afternoon playlist comes from Jenn Pelly, a Brooklyn-based music writer and recent NYU grad in English and journalism. Her music writing, often about the current BK DIY scene, has appeared on Altered Zones, Thought Catalog, and elsewhere and she maintains the weblog Pelly Twins with her sister Liz, who writes about music for the Boston Phoenix. Jenn is a WNYU alum (though she’ll host the New Afternoon Show through this summer) and is also a veteran of #wny11 and the first run of my Downtown Scenes course last summer. Follow her on Twitter @jennpelly.

Previous installments of the guest playlist series related to Patell and Waterman's 33 1/3 volumes on The Rolling Stones' Some Girls and Television's Marquee Moon can be found here and here.

NYC folks: here's a rundown of a few events on the schedule.

And because I've got your attention, I'll just throw this song into the mix: