Song Cycle in The Wire

A cracking review of Richard Henderson's little gem of a book about Van Dyke Parks, in the December issue of The Wire, courtesy of Mike Barnes.

Not sure how legible this image will be, but here's a good quote from the review:

"Parks' early life was truly extraordinary. A musical prodigy and child actor, he appeared alongside the likes of Grace Kelly; later he was a folk guitarist in The Steeltown Two. And by his early twenties he was a sought-after session pianist and arranger. Henderson's research yields many interesting asides, not least when Parks was carol-singing and found himself spontaneously accompanied on violin by one of his neighbourhood's more significant residents, Albert Einstein." 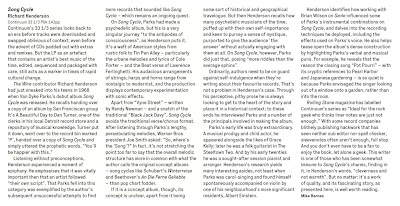