AC DC's Highway To Hell - By Joe Bonomo - plus an exciting contest! 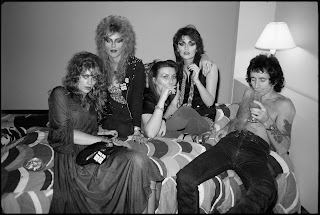 Just in case you missed this one back in May, below is an excerpt from Joe Bonomo's fabulous look at Highway to Hell. Available from the Continuum website and amazon now!

Don't have the cash for the book at the moment?

I've got a lovely copy sitting on my desk with your name on it. And....Joe Bonomo has graciously offered to personalize a book for the winner.

The rules for this contest are simple: Why do you love (or hate) AC DC in 500 words or less.
Go wild, images encouraged. Deadline: Monday, November 8th.
Email submissions to me at agrossan@continuum-books.com

The winner will receive a free copy of the book and have his/her entry posted on this here blog!

Here's an excerpt from Joe Bonomo:

Six years after Highway to Hell was released, Richard Ramirez was apprehended in Los Angeles. Between June of 1984 and August of the following year, Ramirez had murdered and raped sixteen people in the L.A. area, often leaving behind a sick signature of scrawled demonic ciphers, including a pentagram. Los Angeles police stated that Ramirez was a self-described fan of AC/DC, wore AC/DC t-shirts, and at the grisly scene of one of his violent sprees left behind an AC/DC cap. Allegedly, Ramirez’s favorite song was “Night Prowler,” the final track on Highway to Hell.

A haunting, haunted slow-blues, the six-and-a-half minute “Night Prowler” is remarkable for a number of reasons, not least of which is the controlled, vivid band performance in which Angus reaches deep into his love of blues-styled playing and offers affecting, evocative playing. An eerie crawl in 6/8 with the guitars tuned a half-step down, the closer colors in an unsettling way what comes before it. The tune begins with a sharp intake of breath, three chords that outline the music’s dark terrain, and then a tumble into the band performance held aloft by a long, sustained note by Angus that nearly perishes on the strings. Before Bon begins singing, the mood has been established: foreboding, fearful, and dark. Ten years earlier to the month (and only a few miles away) the Rolling Stones had recorded “Midnight Rambler,” a slow-blues similar to “Night Prowler” in its menace and lurch. Some see the Stones’ classic as an influence on Bon and the Young brothers; both songs begin and end in the source material of the blues, Malcolm and Angus’ first love. “Anyone can play a blues tune,” Angus noted to Vic Garbarini, “but you have to be able to play it well to make it come alive. And the secret to that is the intensity and the feeling you put into it.” He adds, “For me, the blues has always been the foundation to build on.”

One of the few songs by other artists that AC/DC would cover was Big Joe Williams’ standard “Baby, Please Don’t Go,” issued as the first song on their debut album in 1975. The guys likely dug Big Joe’s biography: he was a belligerent, itinerant bluesman who spent his formative years in the Delta as a walking musician who played work camps, jukes, store fronts, and streets and alleys from the South through the Midwest. Williams was a hard-working, highly unique and ramshackle kind of player who favored a funky nine-string guitar and a jerry-rigged, homemade amp. The brash and confident punks in AC/DC certainly favored what historian Robert Santelli describes as Williams’ “fiercely independent blues spirit.” The chugging “Baby, Please Don’t Go” became a favorite for Sixties and Seventies rock & roll bands to cover, extend, make their own. Williams’ 1935 version is acoustic mania; critic Bill Janovitz notes that “the most likely link between the Williams recordings and all the rock covers that came in the 1960’s and 1970’s would be the Muddy Waters 1953 Chess side, which retains the same swinging phrasing as the Williams takes, but the session musicians beef it up with a steady driving rhythm section, electrified instruments, and Little Walter Jacobs wailing on blues harp.”

AC/DC loved it. Their take on Muddy’s take of Big Joe’s lament was immortalized in a version broadcast on ABC’s (Australian) Countdown in April of 1975. The band seems to be having a blast with the galloping number, Angus and Malcolm running up and down their frets with a delinquent’s glee, but the kicker — of course — is Bon: he comes onstage dressed like a demented Pippi Longstocking, complete with a short skirt, blonde pig-tails, dark lipstick, and blue eye-shadow. During the solo breakdown, he stands next to Angus and theatrically lights a cigarette, and Pippi’s knee-sock innocent turns into the whore dear to Bon’s heart. Watch Rudd in the video: he can’t keep from laughing at the spectacle.

The blues in “Night Prowler” is slower, sexier, much more sinister than Big Joe’s, and no less indebted to the tradition within which the band has always worked. (I would have loved to have heard John Lee Hooker moan and turn it inside-out.) The tale of a shadowy stalking, though packed with narrative details, wouldn’t have won Bon a Pulitzer. The images in the first verse are hoary, well worn: the full moon; the clock striking midnight; the dog barking in the distance; a rat running down the alley. But Bon’s howling delivery — fully committed, and trusting the time-honored appeal of a dark night’s eeriness — sends tremors throughout the song. Because he believes this stuff, now so do we. The imagery in the second verse is more intimate; we’re in the girl’s bedroom now where she’s preoccupied and scared to turn off the light, fearing noises outside the window and shadows on the blind. Anticipating the second chorus, the verse ends with the singer slipping into her room as she lies nude, as if on a tomb. What’s going on here? Autobiography, or a spec script for a slasher movie? A little of both, likely, given Bon’s personal history and juicy imagination. He sings in the end that he’ll make a mess of her, and I always disliked the line; it adds explicit violence to a scenario that at the fork of fantasy and reality could’ve gone either way. Bon felt that it added to the mise-en-scène, I guess, or he was honestly owning up to hostile tendencies inside himself. Most likely, he was giving his listeners vicarious thrills on the dark side, what they wanted all along.

I didn’t want it. I hardly listened to “Night Prowler” after I bought the album, though I liked the slow burn of the band’s playing and how Angus’ soloing added a voice to the song. The song scared me a little, and I resented having to like a song that I disliked because it’s on a great rock & roll album. Richard Ramirez admitted to loving “Night Prowler” to the point of heinous identification, in part prompting L.A. media to dub him the “Night Stalker,” a nickname that will last in perpetuity. My friends and I rolled our eyes when we heard Ramirez’s story: another nut job trying to use rock & roll as an excuse, as a defense. I remembered years earlier watching The Dukes of Hazzard on television and marveling at the fifty-foot jumps that Bo and Luke would make in the General Lee in some hilly Georgian county. The moment that I belted myself into a Chevy Chevette in the high school parking lot for my first driver’s-ed lesson, I intuited Damn, this thing weighs a ton, and the disconnect between fantasy and actual life was made pretty clear. Ramirez didn’t or couldn’t make such a distinction, and because of that, the closing song on Highway to Hell will be forever linked to a homicidal maniac who tragically took sixteen innocent lives in brutal ways.

A typically winsome gift from Bon himself ultimately rescues “Night Prowler.” In the closing moments, as the chords wane, Bon utters under his breath a weird, nasal phrase that I couldn’t figure out at the time. (What is that, some bizarre Aussie mantra?) Eventually I learned that he’d said, “Shazbot, Na-Nu, Na-Nu.” As AC/DC were recording in the Spring of 1979, Mork and Mindy was ranked third in American television Nielson ratings; Robin Williams’ interstellar character from the planet Ork was invading living rooms and rec rooms at a happy rate, and Bon was watching. “Na-Nu, “Na-Nu” was an Orkan greeting; “Shazbot” an Orkan curse. Maybe that’s what appealed to Bon: at the end of the band’s best album he gets to say hello and swear at the same time, channeling his inner alien. It’s testament to the band’s sense of humor that they kept the aside on the album. It’s a perfect way to send up the danger and fear lingering after “Night Prowler.”

The album ends with a joke, the final words from by Bon Scott on an AC/DC album. Shit! Hello! Perfectly weird.