Hymns to the Silence: Inside the Words and Music of Van Morrison

You may be interested to learn that we've just published Peter Mills' remarkably thorough and erudite study of Van Morrison, Hymns to the Silence.

Neither biography nor chronological trawl, Hymns to the Silence is a detailed investigative study of Van Morrison’s remarkable career. Peter Mills engages with his subject in a fresh and accessible style – often challenging the received wisdom. He looks at Morrison as a songwriter and specifically as an Irish writer, yet one who has worked primarily with American musical forms. Key themes and motifs are examined, as well as the ideas of place, home and exile and Morrison’s periodic use of through-composition in major case studies of four of his best-regarded albums. Each section is full of detailed scrutiny and illuminating examples drawn from right across his recording and stage career, including his 2009 return to Astral Weeks. The book is also studded with fresh and original quotes from people who know about the music, including Maria McKee, Kevin Rowland, Kate Rusby, Ben Sidran, and Fiachra Trench.

Hymns to the Silence is a passionate, eloquent study of the complex and influential art of one of the giants of popular music.

Interesting, too, that our book published at exactly the same time as Greil Marcus' study of Van Morrison, When That Rough God Goes Riding. 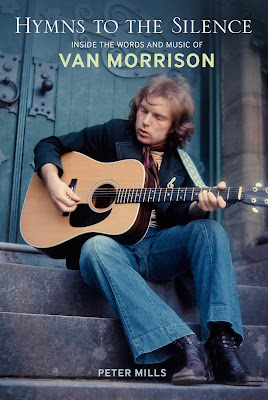 Just been reading Greil Marcus's book on Van the Man. It has some great Marcus touches, but seems like a book he has written quickly - so not the exhaustive study that you have published, perhaps.

Did you know that the UK imprint of Marcus's book - not yet published - has the EXACT same cover shot as your Peter Mills book!?

I found this book very poor indeed and a great disappointment. Despite the author's intentions, his thesis is far too insubstantial and does no justice whatever to his subject. I've discussed this at some length in my Amazon UK review.

I'd be interested if you could comment here on why Continuum elected to import the hardback edition of this book without any dust jacket; the slight economy from doing so is certainly not reflected in the £45 RRP.

I couldn't agree less with the previous comment - insubstantial? At 400 plus packed pages ? Give over man. This is a great book which kicks Greil Marcus's skimpy effort right into touch. It's the best book on a major rock musician I've read since 'Revolution In The Head'. Continuum are to be commended for publishing it, I'd say.