You may be familiar with one or two of David's previous books - Ocean of Sound, Rap Attack, Haunted Weather, and Exotica. This new work is an astonishingly wide-ranging meditation on and exploration of the concept of listening: it's genuinely a beautiful book. Here's a little taste:

There is a conversation between place and person that is articulated through sound, in much the same way that the same or similar conversations are visible as buildings, hedgerows, landfill sites, illuminated signs, motorways unspooling into night or plastic bags floating in the ocean. The relationship of person to place is more straightforward, perhaps, in the reading of such material signs: evidence of their history is easier to track through written records, oral history, photographs, film, a shock of sudden disappearance or the lingering sight of decay. Then how can we listen to sounds never before noticed, sounds long vanished, or sounds that are not sounds, exactly, but more like the fluctuations of light, weather and the peculiar feeling that can arise when there is a strong awareness of place? Sounds can linger as vital presence, an intervention that existed for a time to reconfigure environment, and whose absence makes us pause for thought or deeper feeling, in our walking, working and waiting; our agitated, ceaseless inner thoughts; our shopping and drift; our anxieties, pains and pleasure.

What goes unnoticed in the general run of life still exists, in its colouration, its echoes, its affects, its atmospheres and definitions of place. An unnatural silence, a bell in the night, the dizzying flight of swallows, a sharp cry across the river whose audible flowing is a constant and so would be missed if it ever froze or dried up, the murmur of a quiet pub, wind rippling through grass and at the far edges of hearing there is the scoot of a dry leaf caught in the breeze, the bringing of the milk and the emptying of the bins, a particular street in the hush of early morning, and maybe the name of that street, rolling around in the imagination with the patina of its age and the mystery of its sound.

A few years ago an e-mail arrived, via my website, through which I learned about Steve, previously unknown to me, a man in Havre, Montana, walking through the drizzle and listening to a CD on his Discman (already the story is dated by this technological detail). The CD is Fennesz Live In Japan, by the Viennese musician, Christian Fennesz, and as Steve walks, his CD skips and glitches of its own volition. The technical breakdown adds to the allure of the music, he says, apologising for sharing such a modest story. “Plus,” he adds, “who else am I gonna tell about it in Havre?”

Modest the story may be, but I like it for a variety of reasons. Steve is out there, in the rain, walking through landscape and the elements with his hearing transported to a live show in Japan. Fennesz performs on a laptop computer, but his starting point can be a guitar, building a song on his first instrument, then transforming it through a computer software program. He creates glitches, hitches, loops, distortions. Listening to his records seems to me not unlike eating Japanese natto, those pungent fermented soybeans that extend out into thin strings as you lift them to your mouth. Fennesz pulls his melancholy tunes in all directions without totally working them out of shape.

Then Steve’s Discman has something to say about this, adding another layer of glitch and skip to the mix. Steve enjoys the accidents, though his pleasure in technological imperfections may be a little esoteric for his friends in Montana. Never mind; he can contact a stranger on the other side of the world, elicit a response, and so feel that bit less isolated with this very personal, and perhaps slightly eccentric experience.

Penetrating to the smallest details of hearing, whether as a listening practice or methodology of sound making, may seem to be an entrancement with silence, peace, meditation, all those religious and quasi-religious practices that fall under the rubric of spirituality, but really, it’s an engagement with the noise that exists at all levels of the dynamic spectrum. In his book Microsound, Curtis Roads has described transient audio phenomena and microsounds as ubiquitous in the natural world. Some of these may be what he calls subsonic intensities, those sounds too soft to be heard by the human ear such as a caterpillar moving across a leaf; others are audible but in their brevity as microevents, their infinitely subtle fluctuations, or their placing at the threshold of audible frequencies, they lie outside the conventional notion of pitch, tone and timbre. They are difference; the differentiation of one voice from another, or the activation of one instrument from another. “One could explore the microsonic resources of any musical instrument in its momentary bursts and infrasonic flutterings,” Roads writes, “(a study of traditional instruments from this perspective has et to be undertaken).”

In the springtime at night, I sit outside in my garden sometimes, waiting quietly in the dark until I can hear the tiny chewing sounds of slugs and snails eating the leaves of my plants. I have to allow every part of myself to slow down, to forget what has happened earlier and what might happen later, to use the ‘emptiness of attention’ that I learned from Anton Ehrenzweig when I read The Hidden Order of Art in my late teens. To use a spatial analogy, it’s like descending in a slow lift, moving down through the floors and stopping somewhere near the basement of hearing, where the tiniest of sounds seems amplified. Once down at this level, sounds that are normally considered quiet can shock the system. As snails move from leaf to leaf, snail’s pace of course, the leaf they vacate snaps back into its unburdened position with a bang. This is more disturbing than peaceful.

On a still night in spring, in the darkness, there is little to see other than the static design of my garden, obscured by a shadow world. What I hear is a dynamic sonification of the animate life hidden within that shadow world, eating its ways through hosta, iris, and other succulent leaves, and so the experience of being within that particular place, also hearing the atmospherics of late night traffic noise, spiked by drunken shouts from distant streets and the occasional wailing police siren, contains endless variety at a level of perception so remote as to demand attention that is both focussed and relaxed. Detail is picked out from a low noise floor that I can only describe as air sound – a sound that evades analysis or recording because it combines the sound of our internal functioning, the body sounds we would hear in the total silence of an anechoic chamber, with a blend of near-field and distant-field atmospherics. This undifferentiated background can be comforting, in the immediate present as an indication that life is perpetuated, the world still turns, and at the level of emotion and memory, a reminder of the sonic presence of loudspeakers, amplifier hum, recording noise, ear sound and human presence – the sound of a person sleeping, for example - but it acts also as a grainy context in which detail feels spatially settled. 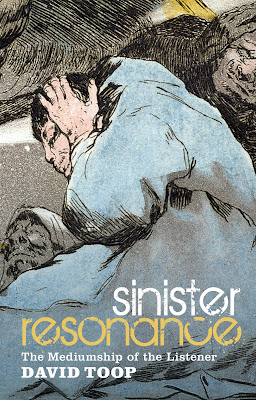