Looking for Calvin and Hobbes

One of our fastest-selling books in recent memory is Looking for Calvin and Hobbes: The Unconventional Story of Bill Watterson and His Revolutionary Comic Strip, by Nevin Martell. The book tells the tale of Watterson's early years and his massive creative and commercial success, while documenting Nevin's ongoing attempts to get in touch with the great man who is (as pretty much everybody knows) something of a recluse. It's an informative and entertaining read, containing some fascinating insights into the world of comic strips and what drives some artists to turn their back on celebrity with such determination.

It was quickly apparent to everyone at Universal that Calvin and Hobbes was a huge commercial hit and they might be able to start making some of that crazy funny money. There was little stopping them. Watterson's original contract with Universal had the syndicate controlling ancillary rights and splitting the revenues with the artist. This was a standard deal for freshman cartoonists, most of whom were more than happy to have their syndicate seek additional sources of income from their work. This meant that the syndicate would try to capitalize on successful derivative merchandise - Hobbes dolls, Spaceman Spiff Underoos, Stupendous Man T-shirts, a Saturday morning TV series, whatever.

However, unlike almost all of his peers, Watterson was not keen on exploiting his creations. "Licensing couldn't have been further from his mind when he was trying to make his little world emerge," Rich West explained to me. "He wasn't sitting next to his drawing board and rubbing his hands together in anticipation of all the money he could make." In fact, the avalanche of commercial interest blindsided the modest young artist. His first reaction was to just say no as he sat back and considered the ramifications of licensing. "Bill's not one of these people who says, 'I want the money and I want the fame and I want the attention,'" West revealed. "All he wanted to do was to draw the strip as best he could. If he was going to be rewarded for that, then that was great, but that wasn't ever the goal. He simply wanted to be able to pay his bills by being able to draw."

Watterson's modest vision of success was puzzling to Universal, whose other artists were pestering them for the kinds of offers that Watterson was reflexively turning down. After all, who doesn't want to be successful and earn a boatload of money? Well, Watterson didn't. Everyone at Universal quickly realized that Watterson's dream was vastly different and that this new-found fame was more like a nightmare to him. Watterson wasn't just uncomfortable with his characters becoming ubiquitous; he was worried about becoming ubiquitous himself. Despite the fact that he had told Lee Salem that he didn't want to do any further interviews after his negative experience with the Los Angeles Times interviewer, Watterson agreed to sit down with the Plain Dealer in the summer of 1987. Though the interviewer probably went to get a piece on Watterson's happiness with his success, he got something completely different - a full-on rant that was Watterson's manifesto against celebrity. The resulting article ran in the Plain Dealer magazine of 30 August 1987 and bore the front-page headline "The Angry Artist Behind Lovable Calvin and Hobbes."

The writer meets up with Watterson at his "small," "cramped" and "difficult to find" house in Hudson, where the artist is hanging out with his wife and three cats, Pumpernickel, Sprite and Juniper Boots. Watterson answers the door wearing large-framed glasses and his work outfit, "yellow high-top sneakers, purple socks, yellow slacks, a striped shirt and thin blue belt," as well as a red, green and purple Swatch. Though he has a Marine-length buzz cut, his moustache is profuse, as is his ability to laugh over the course of what is not such a laughable discussion.

"I know most people dream of being famous or being a celebrity," Watterson confided to sports editor Gene Williams, who conducted the interview. "The attention is thought to be gratifying, or ego-building or something. I've found it to be a nuisance all the way around. There's very little of it that I enjoy." Apparently, that celebrity was an unwanted yoke of oppression. "You become a cartoonist all your life, all day," he continued. "It's no longer a job. You are defined by your work. You suddenly have no private time. You cannot be a husband to your wife, you are still a celebrity cartoonist...I find that aggravating. If you can't have a personal life, it really seems to me to be a sacrifice."

"As a culture, we embrace people for no reason other than the fact that they have a job that puts them in a position of recognizability," Watterson aggressively opined. "People who have no other virtues necessarily are somehow made into these things that we devour...There's something very strange about our fascination with other people's lives that I don't think is entirely healthy."

This was Watterson's strongest statement to date on his aversion to the recognition that had accompanied the rise of Calvin and Hobbes. Though he had discussed his discomfort with autograph seekers and being recognized in public before, this last conversation really finds him lashing out at the construct of celebrity. Even then, he recognized that his stance might be misunderstood. "People think I'm either a grouch," he declared, "or that I somehow think myself better than other people, and I'm just not willing to expose myself to the unwashed masses. Neither is the case. It's just that I want to have my own life, too."

"As part of this devouring process," he continued, "people love to have you, and then they use you up and there's nothing left. They're not interested any more. It's a cyclical thing." Watterson was especially afraid of this devouring because of the negative effect it could have on the sustainability of his work. "There are trends where there is a hot strip and then people don't care any more. A certain amount of that is inevitable. But I'd like to control it if I can."

His final comment is the one that would prove to be most prophetic. "Why start compromising values now?" he asked Williams. "Why tamper with what's important to me? The whole fun of doing this is I beat the odds. I beat the system. I get to do what I want, the way I want to do it. There's no point in buckling under now after I've made it." 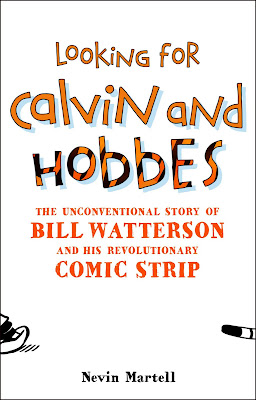