Little Richard: The Birth of Rock'n'Roll

I'm thrilled to announce the publication of David Kirby's effervescent study of Little Richard. We received this lovely pre-publication review from Booklist:

In the poem “The House of Blue Light”—whose eponym is where Miss Molly does her rockin’, dontcha know—Kirby says that when he, à la Whitman, hears America singing, it “sounds like Little Richard.” He sticks to his line in this high-spirited, ambulatory meditation on Richard’s America. Ambulatory literally as Kirby pinballs mostly around Macon, Georgia, Richard’s hometown, but also New Orleans, where Richard recorded his first big hit, and L.A., home of Specialty Records, which Richard made a major independent label. Ambulatory spiritually, too, because Kirby adopts Greil Marcus’ canny conception of Old, Weird America—poor, superstitious, culturally “backward,” but always striving—as the homeground of rock ’n’ roll (along with the other vernacular American pop musics: gospel, blues, country) to explain Richard’s artistic roots. Kirby insists that that first big hit, “Tutti Frutti,” a cleaned-up “paean to heinie-poking” howled by “a gay black cripple from a town nobody ever heard of,” is the first 100-proof rock ’n’ roll song and devotes the central chapter here to its creation and impact. Kirby packs his prose as fully as he does his verse and likewise runs it on high octane, pedal to the metal. He beats all the professional rock scribes hollow with this light-footed but profound little book.

And here's an extract, from the very beginning:

“What are you doing in my cousin’s apartment?” says Little Richard, and the answer is that I’ve come to Macon to write a travel piece for The Washington Post and also do research for a book on the Georgia Peach himself. Willie Ruth Howard is two years older than her celebrated relative, which makes her 77, and even though it’s a hot day, I’ve put on a sports coat and brought flowers, too, because I want her to think I’m a gentleman and not just a fan trying to hop aboard the singer’s coattails.

When the phone rings, she talks for a minute and says, “It’s him,” and “He wants to talk to you,” but before I can start telling Little Richard how the world changed for me when I turned on my little green plastic Westinghouse radio in 1955 and heard a voice say, “A-wop-bop-a-loo-mop, a-lop-bam-boom!” he says, “What are you doing in my cousin’s apartment?” and then “Uh-huh. Well, look around you. You can see that my cousin is very poor, can’t you?” and I’m thinking, well, she looks as though she’s doing okay to me, but who am I to disagree with Little Richard, so I say, “Sure—yeah!” and he says, “Well, then, what I want you to do is get out your checkbook and write her a check for five hundred dollahs!” and I’m thinking, Jeez, I brought her these flowers. . . .

And I say, “You’re welcome, Mr. Penniman! But I’d really like to talk to you as well, so how do you feel about giving me your phone number?” and he says, “I’m not at home right now! I’m in Baltimore!” and I say, “That’s good, but can I call you when you’re back in Tennessee, maybe fly up and see you some time?” and he says, “I’m not in Tennessee! I told you—I’m in Baltimore!”and I say, “I know, but when you are in Tennessee,” but he says, “Give her the phone again!” and while Willie Ruth is ending the call, I’m looking around and thinking, did Little Richard just get me to take $88 out of my wallet and give them to a cousin I’ve barely met?

On the other hand, I’ve probably spent more than that on a single phone call to some woman I was breaking up with, and a fairly horrible woman, too, or else she’d be with me today and I with her. My goodness! How’d that be, to be chained to a shrew who despised me and treated me like her servant, an attitude hardly calculated to improve my disposition, so that I, in turn, would become more and more truculent and pettish and in that way increase her disdain for me. . . . When I look up, the call’s over, and Willie Ruth is sitting quietly on the couch with the phone in her hand, and she says, “Was he rude?” and I say, “Uh . . . business-like!”

Which is true, because while he was forceful and direct, he wasn’t discourteous. And I didn’t have to part with a cent, but I did, and now I’m talking to Willie Ruth Howard, and she’s saying, “Well, you know, he did get cheated a lot back when he was first starting out, when those record company people took all the money and didn’t leave the singers with anything. Besides, he was so poor growing up. So poor. . . .” 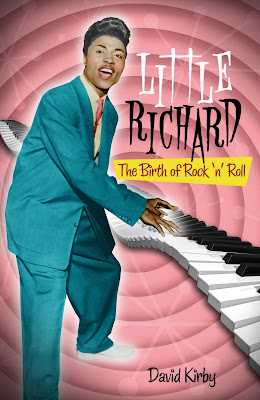 where is the lucinda williams' volume, please?

i can't find it anywhere.

Great extract - it's added to my 'must buy' list!

I love the extract - hilarious. The quasar of rock, Little Richard!!! I look forward to reading this.