I'm very pleased to announce that Wilson Neate's brilliant book on Pink Flag is now publishing across North America. (Those of you in the UK and further afield - it'll be mid-April, probably.)

The book features in-depth analysis and history of the album's origins and creation, with input from pretty much all the band members. There's also a smattering of very rare images, a foreword by Robin Rimbaud, and reflections from luminaries including Graham Coxon, Steve Albini, Henry Rollins, Ian MacKaye, and Robert Pollard. Also, the colour scheme on the cover is just gorgeous. Here's the copy from the back of the book...

"Pink Flag is very much about the climate of the time: about 1977, about punk rock," reflects Colin Newman. "But it's not a punk record. It's about giving punk a good kicking using the tools of punk. It was very much about not being like the Sex Pistols or the Clash - or another rock band." Wire emerged late in punk's day, when its creative impact had dissipated. A second wave of bands was transforming punk into a cartoonish, homogeneous style, reconstituting formulaic rock-as-usual, and Wire's initial excitement at the potential of this cultural revolution had turned to ambivalence. Wire shared some of punk's vocabulary but spoke another language, and Pink Flag may have been the first post-punk album, although - or because - it embodied punk's most radical spirit.

More punk than punk and more genuinely arty than art rock, Wire pursued an obsessively minimalist, conceptual aesthetic, playfully discarding conventional boundaries between fine art and popular culture. While British rock abounds with art-school musicians, few brought that pedigree to bear on their work as rigorously and adventurously as Wire. Drawing on original interviews with Wire and their producer (plus contemporaries and heirs), Wilson Neate offers a sharp and incisive study of Pink Flag in the context of the punk scene and broader rock traditions. 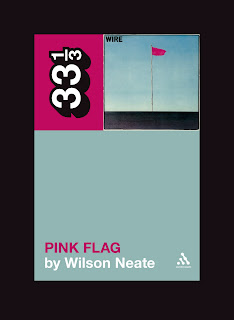 Oh is it more, too much more than a pretty face
It's so strange the way he talk, it's a disgrace
Well I know I've been out of style
For a short while
But I don't care how cold you are
I'm coming home soon
I'm gonna make you a star, yeah

Have you been at the sherry again gran?

Not quite, mate - but alcohol-fueled nostalgia is unpredictable. Who'dda thought - David Essex. Teen dream of a million 70s girls. But, I look forward to reading the book and I hope it makes yer a star

I am looking forward to this one. No email address readily presented itself, and I your card from an MLA eons ago has vanished into the midden, so I'll use this venue to let you know that I will be giving a paper on Zanes and Dusty at the PCA/ACA conference in New Orleans this April. Feel free to email jbfield@gmail.com, if you would like details.