Largehearted Boy features Joe Bonomo's Book Notes today - a list of ten great songs that the Fleshtones (the subjects of Joe's book Sweat) have covered over the 30-plus years of their SuperRock existence. Here's just a couple of them:

A lot of people think that “Louie Louie” is the Fleshtones' sonic cornerstone, but “Cara-Lin” has always sounded to me like the one that The Fleshtones wouldn’t exist without. An irresistible hip-swinging groove, funny yell-along words, and an hilarious back-story involving three Jewish guys from New York pretending to be refugees from the Australian outback. Only in the 60s? The Fleshtones have been playing it since they formed.

Historic: The Fleshtones were the first American band to play this song. They learned it from a mix-tape brought over from the U.K. by a friend, a local NYC rock journalist. The Fleshtones worked up a ragged, speedy cover and debuted it at Max’s Kansas City before Never Mind The Bollocks was released in the U.S.

I've probably said this a million times already, but Joe's book is a great, great piece of American rock'n'roll history. Well worth reading! 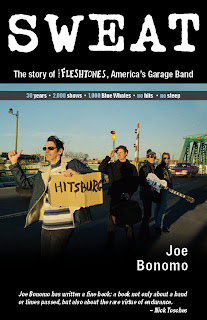