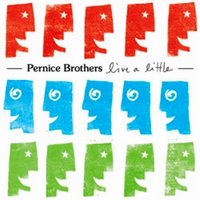 The new Pernice Brothers album is out, if you didn't know. Entertainment Weekly gives it an A minus, I give it a straight A. Oh, who to believe??

Too many great songs to mention - but "Automaton" in particular would slot perfectly on to Odessey and Oracle, "PCH One" is like "Piazza, New York Catcher" but a hundred times lovelier, and "B. S. Johnson" is magical.

Long-time (if not rabidly insane) readers of this blog will recall that we published Jonathan Coe's jaw-droppingly good biography of B. S. Johnson a while ago. Almost nobody in the US bought it (in stark contrast to the book's publication in the UK, where it won prizes and sold by the thousand), but at least now it's inspired this song. If you've neither read the book nor heard the song, and you have around $20 to spare, do this: buy the book, read it (preferably two or three times), then listen to Joe's song about Johnson. It'll make you cry.
Posted by David at 7:58 PM