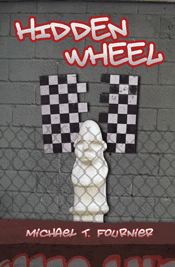 Michael Fournier, author of the excellent 33 1/3 on The Minutemen's Double Nickels on the Dime, has just released his debut novel Hidden Wheel with Three Rooms Press. More importantly, he has a Kickstarter page going to fund a book tour in the spring that is bound to be a wild ride. Here's the link to the Kickstarter page with more info on the project.

The novel focuses on the art and punk scenes of the Midwestern city Freedom Springs, where an opportunistic trustfunder named Ben Wilfork starts an all-ages art/show space names Hidden Wheel. Max Caughin, who tags under the name Faze, gets famous quick with a series of paintings on CD covers. His buddy Bernie Reese donates sperm to raise money for a new drum kit so his two-piece noiserock band Stonecipher can record. Bernie's romantic interest (and former chess prodigy) Rhonda Barrett does dominatrix work by day and paints her life, sixty words at a time, on giant canvases by night. Their fates intertwine in a story reconstructed by William Molyneux, a 24th Century scholar reconstructing the Hidden Wheel scene after a solar flare erases all digital data in his era.

Dead Trend started as a fictional band in Hidden Wheel, Freedom Springs' biggest musical export. As I wrote the book, I also wrote Dead Trend songs -- short blasts of punk focusing on 1986 topics like Reagan, the Berlin Wall and Chernobyl. Some friends and I put the band together this summer, with me playing drums and doing backing vocals. We have a 7" coming out soon on Baltimore's Save vs. Poison Records. In the meantime, our music is available via cassette tape -- demo versions of our songs recorded this summer, as well as a live set recorded in Orono, Maine.
Posted by John Mark at 3:16 PM

I have recently started reading Mike's book and it's a fun and challenging read. I find his style to be so enjoyable if you let the words wash over you without trying to parse his overall writing style like a scholar. Love the cover, too, Mike! Proud o' ya!