Three albums, three books, three authors... One event!
Friday, September 17th, 7pm - Quimby’s Bookstore, 1854 W. North Ave, Chicago
Joe Bonomo – AC/DC’s Highway to Hell
Joe Bonomo strikes a three-chord essay on the power of adolescence, the durability of rock & roll fandom, and the transformative properties of memory. Why does Highway To Hell matter to anyone beyond non-ironic teenagers? Blending interviews, analysis, and memoir with a fan’s perspective, Highway To Hell dramatizes and celebrates a timeless album that one critic said makes “disaster sound like the best fun in the world.” Joe Bonomo teaches in the English Department of Northern Illinois University. He is the author of Sweat: The Story of the Fleshtones, America's Garage Band and various other works.

Mark Richardson – Flaming Lips’ Zaireeka
The Flaming Lips' 1997 album Zaireeka is one of the most peculiar albums ever recorded, consisting of four CDs meant to be played simultaneously on four CD players. Approaching this powerful and complex art-rock masterpiece from multiple angles, Mark Richardson's prismatic study of Zaireeka mirrors the structure the work itself. Thoughts on communal listening and the "death of the album" are interspersed with the story of the Zaireeka's creation (with assistance from Wayne Coyne) and an in-depth analysis of the music, leading to a complete picture of a record that proved to be a watershed for both the band and adventurous music fans alike. Mark Richardson is the managing editor of Pitchfork. He was a contributing editor to The Pitchfork 500 and his writing on music has appeared in many publications.

Scott Plagenhoef – Belle and Sebastian’s If You’re Feeling Sinister
If You’re Feeling Sinister shows how Belle & Sebastian transformed themselves over the space of a decade, from a slightly shambolic cult secret into a polished, highly entertaining, mainstream pop group. Along the way, the book shows how the internet has revolutionized how we discover new music—often at the cost of romance and mystery. Scott Plagenhoef is Editor-in-Chief for Pitchfork Media.
* * * * *
And just because, here's a picture of Bon Scott and friends in a hotel room in Atlanta, from page 76 of Joe's Highway to Hell book. 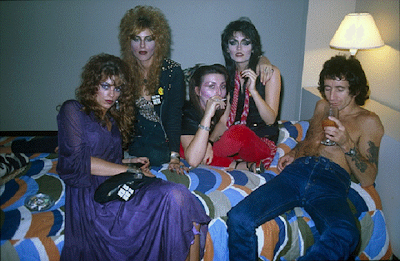 Update: some love from Chicagoist!
Posted by John Mark at 3:27 PM

Wha? Is that Motley Crue - before the beginning, so to speak - right there with Bon Scott?!?

Those are ladies (though the tallest one looks more like Rikki Rockett from Poison than a member of Cru). You'll have to read page 77 in Joe's book for the story... or maybe he can elaborate on Friday night.

Before I looked closely I coulda sworn those were men in drag?

I'm sure there was a point in the 80s when even members of Poison were thinking there was a problem 'cos all the groupies looked liek them! Or Nikki Six.

Bon seems to be nodding out. I love the way rock stars often get to hang around bare-chested all the time.