There's a superb discussion of Israel Kamakawiwo'ole and Hawaiian music and culture over at Fluxblog - well worth reading. Dan, of course, is the author of the 33 1/3 volume on Iz's album Facing Future. (Fun fact: it's the only 33 1/3 book to have made it into Target so far!) An extract:

Matthew Perpetua: I think it’s very interesting in terms of how music spreads in different ways now, and how we have these alternative models for becoming well-known. It’s a really interesting case study for that.

Dan Kois: Right! Even with the Internet, the fact that a 1,000-lb Hawaiian man with a ukulele is about to go double platinum is pretty astonishing.

Matthew Perpetua: It really gives hope to all sorts of amazingly talented misfits. Susan Boyle owes him a debt, perhaps.

Dan Kois: I was just thinking of her! She’s one of the few artists for whom the disconnect between image and sound is as jarring to mainstream audiences as Iz’s.

Matthew Perpetua: At the same time, she’s marketed on those looks. The hook is that she’s this person who looks like the total opposite of anyone’s conception of a popular artist. People are attracted to the notion of her being a pure talent, which is the case with Iz as well.

Dan Kois: Right, whereas for all the things that has annoyed me about Mountain Apple, they’ve never once marketed Israel on being “the fat Hawaiian guy.” It’s always been the music they’ve sold. By all evidence he was a pure talent. He certainly had a great voice. He didn’t write many songs but some of them are great. And he could play a ukulele like the dickens — his bandmates all speak fondly of his skill with the instrument, even though he rarely tuned it very well.

And you can read the whole interview here. 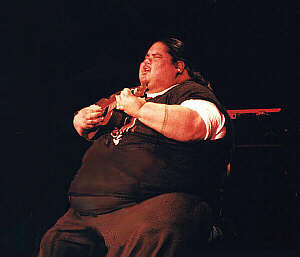 That's a good answer. You are so amazing and talented.