One more post from Bruce Eaton's book - I love the way this passage captures such an intense moment for the author and shines a little more light on Chilton's attitude towards music and performing.

When Alex arrived from Memphis the afternoon of our show, he was affable and we immediately felt at ease. We had a few matters to deal with — a proper rehearsal being at the top of our list. Alex immediately nixed the idea, spelling out a musical philosophy that went something like this. Whenever you play something for the very first time, there’s a chance that it will sound better than anything that could be rehearsed — and those highpoints are worth all the mistakes. In other words, Let’s go out, make some music, and see what happens.

Alex was confident and articulate — he won us over even though we really had no choice but to go along for the ride. We whiled away the time up to the show, sitting around a friend’s apartment while Bill and Alex got deep into a freewheeling conversation that the rest of us drifted in and out of. Alex in the present proved to be a very interesting guy — it never crossed my mind to ask him about his past. I wouldn’t ask him a question about Big Star until nearly three decades later.

McVan’s was a once swank, now dank nightclub that in its heyday had hosted Art Tatum, Coleman Hawkins, the Inkspots (with a young guitarist named Jimi), Frank Sinatra, and Gypsy Rose Lee. In 1979 it was the place to go in Buffalo if you wanted to hear punked-up garage rock in rapidly decaying surroundings (beyond repair, the building was torn down a few years later). We arrived in the middle of the opening band’s set, noted that the place was packed (I’d all but forgotten that I was also the promoter — having put my own money up for the show) and headed straight for the dimly lit, seemingly once luxurious dressing room.

You could almost see the ghosts. For about 20 minutes we stood in a circle, guitars unplugged, Joe beating his sticks on the arm of a musty velvet-covered club chair (had Jimi once sat there?), running through the songs on the set list, Alex quickly teaching us the chords to the few we hadn’t been able to track down on record. As we got ready to go on, Alex told Joe not to be afraid to “kick his ass” to keep him from lagging behind the beat. With a sly smile, Joe assured him that wouldn’t be a problem. Then, before we had another moment to ponder the absurdity of playing with Alex Chilton totally on the fly in front of friends and spectators half-expecting us to crash (some even relishing the prospect), we heard Bill onstage revving up the crowd — “Here he is, the mad man from Memphis . . . . Alex Chilton!!” — and we headed out toward the lights.

First up on the set list was ‘Bourgeois Blues’ — a Leadbelly song from the Panther Burns repertoire that Alex had taught us a just few minutes prior. A simple riff twanging off low open strings, Alex counted it off and we ripped into it with abandon — our nerves melting into pure adrenaline. Joe laid into the beat like a human cannon, I worked the bass strings as if they were rubber bands, and Pete and Alex traded progressively unhinged solos. For those five or six minutes we were the best band on the planet. Alex had been right — we could have rehearsed for a thousand years and never come close. The crowd cheered loudly as we rumbled to an end. Alex seemed pleased, the band exhaled a collective sigh of relief, and we set about our work for the evening.

The rest of the show went by in a flash as we dutifully whipped up the “psychedelic r&b mania” that the posters around town had promised. We successfully negotiated the curves of ‘In The Street’, lost the Bolan-boogie beat in ‘Telegram Sam’ for a bit and were suitably atmospheric for ‘Kangaroo’. And then late in the set came ‘September Gurls’ — a bit ragged but suitably majestic — and the clock slowed down. How many times had I listened to that song? And here I was, playing it with the guy who wrote it. Somehow I was able to pause and take in the moment. We finished up the set and headed down the hall to the dressing room with the audience shouting for an encore. Alex turned to Pete, “Do you want to play the ‘The Letter’ or should I do ‘Love Me Tender’ solo?” Greedily we all chimed in for ‘The Letter’ — Alex singing Elvis would have been a great moment and we still kick ourselves over that call.

I woke up the next morning with the kind of pinch-me feeling you have when your first date with someone you’ve had your eye on for a long time goes impossibly well. On the way to the airport I felt confident enough to ask Alex how we had done compared to other bands. “Best yet,” was the reply. I later found out that he said that a lot — a steadfast refusal to be weighed down by the past. Joe asked Alex if he’d written ‘The Letter’. “You think I would have been playing with you last night if I had?” was the reply — a one sentence lesson in where the real money in music lies. Alex got on the plane back to Memphis and I figured that was the end of a really good story. 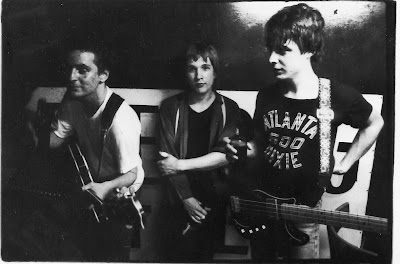 Thanks for posting this, this really hit the spot, Alex Chilton was fantastic, I've been a bit surprised how all the stuff I'm reading is all about Big Star....me, I got into Chilton first through his wacky solo albums and, though I love Big Star, I've always thought of him as a solo artist (the 1970 album is great!), "Like Flies On Sherbert"...."Underclass" ("Some people think I'm a rich musician/but oh no no, that is not my condition" HA!!), The EMI Song, gorgeous....his comment before launching into a demented version of "Free Again"(one of two on "Bach's Bottom"): "Does anyone have anything for a headache? I need a paaaaaaaain pill", ha! I just always have loved him and his spirit and this thing you posted really made him come alive. Thanks again, and Alex Chilton, I sure am going to miss you, I can't believe you're gone, it's beyond tragic.

What a delightful story. Home from work with laryngitis,looking for chords to Alex Chilton songs to play on my Ukulele, I found your post. Thanks.

Fantastic. I'm going to need to read that book.