Another brand new Continuum book we're very excited about is Joe Bonomo's thrilling study of Jerry Lee Lewis - which started life, if I remember correctly, as a proposal for a 33 1/3 book. (Joe did eventually get the green light for a 33 1/3: his awesome volume on "Highway to Hell" will be out in the spring...)

Although Jerry Lee Lewis: Lost and Found focuses on the extraordinary "Live" At The Star-Club album, it covers a heck of a lot of other ground, too, and - to me at least - gives real insight into Jerry Lee's entire career.

Here's an extract from the book.

As sequenced by Loch, “Live” At The Star-Club begins with rolling l’s tossed at the riotous crowd, in Jerry Lee’s typically lubricious, come-on way. As Jimmy Gutterman puts it: “He did not wait for the opening number to start performing.” The trio of songs that opens “Live” At The Star-Club are so gargantuan, so impossibly rocking and intense, that it’s a wonder that the listener survives them. They call to my mind the opening salvo of the MC5’s Kick Out The Jams and the Ramones’ It’s Alive — breakneck, barely controlled, scary — and are among the greatest rock & roll ever taped.

Perhaps Jerry Lee ratcheted things up because it was the last night of the tour, and because he knew that the show was being recorded. Or perhaps, stinging from his polite performance in front of Richard Green in the New Musical Express offices a few weeks earlier, he was psyched to do American music proud in the face of this longhaired Limey nonsense (“I used to think that they were a bit wooden . . .”). Perhaps the Prellies that Fascher remembers Jerry Lee extravagantly downing nightly with whiskey chasers amped up his native speed, leaving the Nashville Teens coughing in his exhaust. Perhaps we’re simply lucky that this particular show in April was recorded.

When the lights come down and the emcee bellows “Jerry Lee Lewis!” to a cacophony of cheers, whistles, and clapping, we’re transported into the loud, smoky Grosse Freiheit 39 on a rowdy Saturday night. Loch’s crowd microphone and the subsequent mix tap the cries, hollers, cheers, and sometimes stray conversations of the large crowd, surely as essential an ingredient of the album’s triumph as the performances. Horst-Dieter Fischer recalls that before the second set, folks were asked to leave the dance floor and to sit down at the tables and at the bars, to eliminate audience noise from the recordings. The well-intentioned effort failed, thankfully. The crowd at the Star-Club on this evening doesn’t hide, muffled, behind a soundboard veil — everyone’s around you, behind you, elbowing, glad-handing, throwing their collective
inebriated arm around you. Who needs Steinhagers or rum und koks? “Live” At The Star-Club is the only album I know that can get you drunk even if there’s no alcohol in your house.

“Mean Woman Blues,” the lead cut, is nothing short of a mini concert in and of itself. Loch chose well: Jerry Lee had released a version of Claude Demetrius’ song on an EP in 1957, a few months after Elvis Presley had issued his own take (on the Loving You film soundtrack). Elvis’ version was fun, swinging, and pretty dirty for the late 1950s, and he clearly has fun taking the risk. Jerry Lee’s version is typically perverse in that the subject of the song shifts from a woman who’s so mean that she fucks with an angry face, to . . . well, to the Killer himself, who pinches the spotlight in the first verse and never relinquishes it.
Oh, the mean woman gets a nod or two, mostly in the form of lascivious ogling of ruby lips and shapely hips, but apparently more urgent for Jerry Lee is a discourse on his love for coffee and tea. As always, the lyrics take a back seat to their filthy delivery, which takes a back seat to Jerry Lee’s piano playing, which takes a back seat to nothing and no one. By the end, “Mean Woman Blues” is the Killer’s only(with help from the rock-steady trio of Roland Janes, J.W. Brown, and Jimmy Van Eaton, of course). And it’s become the standard bearer: when Roy Orbison released his version of the song in 1963, he assaulted welcoming charts with Jerry Lee’s arrangement, substituting his own name for Jerry Lee’s in a kind of a geeky, understudy eagerness that somehow works.

Seated onstage, he cocks his head, looks over his right shoulder at the smoke-filled crowd, lets a rolled “l” escape from juvee hall and issues a grand “onyourmarksgetsetgo” glissando that leads to a suspenseful “Mmmm” before the flag is dropped: “I got a woman, mean as she can be!” Barrie Jenkins, on cue from the cheers of recognition erupting before the first line is out, sprints out of the gate with a snare roll, and the 40-minute gallop is on. What follows sets the benchmark for the rest of the album: loud, crashing, and impossibly fast.

“Mean Woman Blues” smokes. Pete Harris’ bass is warmly recorded, providing ample road for Jerry Lee’s jalopy-joyride of a performance, and Jenkins and John Allen ably keep up, Jenkins punishing his ride cymbal in double-time and Allen battening down the hatches with a clipped rhythm, tossing out tentative licks at the ends of some lines — but for all intents and purposes the Nashville Teens sound astonished, as if they’ve awoken on a carnival ride at the crest of a steep hill. Jerry Lee’s left hand is bedrock: sure, cocky, clock-perfect. His right hand virtually stages a show itself: rooster-like in its swagger, proud, fl ashy. Thirty seconds into the song and you can feel the sense of wire-taut fun and abandon, and the palpable fear that the whole thing might fall apart soon if the players aren’t careful. The Nashville Teens pay close attention to the verses — remember, only 30 seconds before they didn’t know what song they were going to be playing — and hit the stops well, though the Killer rushes through them, impatient.

Soon the song arrives at the place everyone in the crowd is waiting for, the first solo — Jerry Lee lets loose a yeah-hah! and pistons his right hand in eighth notes while Jenkins and Harris squeeze shut their eyes and go along for the ride, borne aloft by a delirious whistle from the crowd. The glissandos are hysterical now. Jerry Lee tosses Allen his first guitar solo, which he plays well, raw and choppy, though it’s hard to hear in the mix and beneath his bandmates’ bashing around. Jerry Lee speeds up and barks “Go!” to the band — impatient to get back on mike? Testing the band’s endurance? By the time the Killer does butt back in to holler that he ain’t bragging but you know it’s understood that when he does something he does it mighty good, it sounds like redundant boasting.

The book also features gorgeous cover art based around an original painting by Jon Langford of the Mekons. Enjoy! 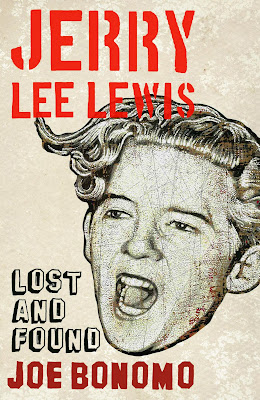