We're very pleased to announce that Geeta Dayal's long-awaited book for the series about Brian Eno's Another Green World album is finally on sale and fully distributed throughout North America.

As Geeta herself would be the first to admit, it wasn't the easiest book to write - but the results are well worth it. Here's an extract from Chapter 5, "Abandon Normal Instruments."

Eno's insistence on calling himself a "non-musician" was partly a reaction to the prog-rock of the time, and the 1970s emphasis on virtuosity. It was also a logical extension of his interest in experimental music, and his experiences in Cardew's Scratch Orchestra and the Portsmouth Sinfonia. Eno was an emerging type of musician; he was a true synthesizer player. In the 1980s, Eno would become a virtuoso player of an instrument - the Yamaha DX-7.

In a way, Eno's lack of formal training was a gift. It meant he approached the synthesizer for what it was: a generator of complex sounds, not as a keyboard. He came at synths from tape machines, and from using tape recorders as generators of strange sounds. This was in stark opposition to the famed progressive keyboard noodlers of the time, like Rick Wakeman of Yes, who treated the synthesizer primarily as a very fancy keyboard.

Eno's lack of formal musical training made him more predisposed to view the studio, too, as a sort of synthesizer, a way to build new sounds. "The documentary aspect is part and parcel of most recording studios," said Harold Budd. "You perform something and it's captured, and it's recorded and pressed and put out in the world. The part with Eno was just the opposite. You use the studio in order to get the sounds that are going to be captured, you know what I mean? It just put a reversal on it."

Eno may have been a studio maven and a synthesist, but he wasn't much of a gearhead. "Some producers go in, and they say, 'Have you got the Lexicon 224 echo?'" Eno said in a 1981 interview with Jim Aikin in Keyboard Wizards. "'Have you got this, have you got that? Oh, you haven't got that? I can't work here.' Suddenly their world crumbles because you don't happen to have the new Eventide D949 phaser, or whatever it is, and they can't envisage working without this. But when I go into thte studio, I look around and see what is there and I think 'Okay, well, this is now my instrument. This is what I'm going to work with.' Another example would be when you're faced with a guitar that only has five strings. You don't say, 'Oh God, I can't play anything on this.' You say, 'I'll play something that only uses five strings, and I'll make a strength of that. That will become part of the skeleton of the composition.' That's really what I mean, that any constraint is part of the skeleton that you build the composition on - including your own incompetence."

And there's much more, over at Geeta's blog. 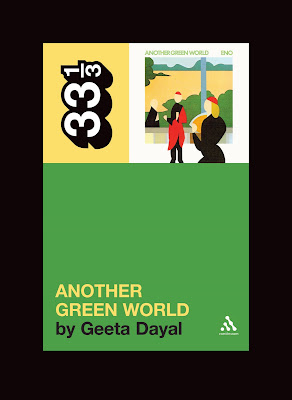 I'm almost done with this one and it's one of my favorite in the series so far. It's usually a good sign when the book spurs me to listen to music by the artist in question heavily — which is all the more impressive here given the fact that I've found it tough to get away from the greatest band of all time, the Super Furry Animals, for the past month or so.

Ever so close to closing the gap to Volume #69!

Dayal's Another Green World is an excellent introduction to Eno during his mid-1970s period. Glad the book finally came out.

Follow the link below for a review of the book:

What UK shops can i purchase this book in? I cant seem to find it anywhere!

Awesome. It is amazing how some people come up with cool ideas.