Here are a few of our music books, 33 1/3 and otherwise, that have been pulling in great reviews lately. I thought you might be interested. If so, read on... Click on the quote attribution to read the full text of the review.

USA Today’s Pop Candy blog has a review of A Cultural Dictionary of Punk:

“I take a little notebook wherever I go -- I'm sure some of you do this, too -- so that anytime I hear about a cool film or something I should check out, I can jot it down immediately. A Cultural Dictionary of Punk is like a compilation of everything I've scribbled in little notebooks over the last 15 years. ...Much has been written on the subject, but this well-researched and respectful title is one book that should be appreciated, not rejected, by today's punk scene.”
-Whitney Matheson, USA Today's PopCandy 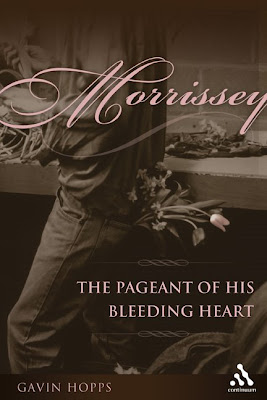 ...and one for Gavin Hopps' Morrissey: The Pageant of His Bleeding Heart:

"Hopps manages to tell Moz's life story in a way that educates even the most hardcore fans (like me). By comparing the artist to Romantic poets and incorporating references to film and other art forms, Hopps examines the former Smiths frontman with a critical eye and treats him as one of the most talented singer/songwriters of the last century. (And he is, isn't he?) Dive in, grab a highlighter and savor the plentiful footnotes."
-Whitney Matheson, USA Today's PopCandy

Seattle’s KEXP radio station is now also broadcasting in NYC on the FM dial (91.1), increasing their listenership significantly, to say the least. They are a most welcome addition to the somewhat dismal radio landscape... Much better than listening to the Mets lose game after game, that's for sure.

Here is a review of the Morrissey book (it really is stylish and seductive. Props to the production team on this one):

"Hopps gives [Morrissey] plenty of passionate, well-informed attention in The Pageant of His Bleeding Heart, a stylish and seductive hardcover from Continuum that reflects the love and devotion of its author to the subject’s worldview and musical expression. This is not a rote biography or analysis of the shebeens and spielers with collaborators, but an ideal inquiry into the aesthetic and forces which shape Morrissey’s lyrics, persona, and own influence on worldwide music culture."
-KEXP, Seattle, WA (scroll down)

And again with A Cultural Dictionary of Punk:

"Rombes makes A Cultural Dictionary important by clearly writing about the weird marginal forces that swirled into CREEM-reading, all night donut shop youth haunted Ohio at the end of the Vietnam war era, and editing out a ton of stuff called “punk” in the years since 1982."
-KEXP, Seattle

And a glowing review of the Nas Illmatic 33 1/3 by Matthew Gastaier:

"The album in question, Illmatic, is an inarguable choice...from the cover art (the portrait of the artist as a very young man), to the future-forward evolution of the music form it led, to the timeless high quality multi-syllabic rhyming, weaving complicated rhythms around those still-borrowed-from beats — author Matthew Gasteier hit it square."
-KEXP, Seattle
Posted by John Mark at 12:18 PM