Of the 60-something books we've published in the series so far, none polarizes opinion more than Stephen Catanzarite's volume on U2. There's a great new review of it on Inside Catholic.com, written by Mark Judge, opening with the line "Stephen Catanzarite has written arguably the most important book about rock music of the young 21st century". People either really love this book, or it drives them up the wall, which was clearly going to be the case even as I read Stephen's compelling proposal, a few years back.

I can only think of two volumes in the entire series, for which I've never seen or heard a single negative word - Mark Polizzotti's Dylan book, and Dan LeRoy's book on the Beastie Boys. Of course, feel free to disabuse me of that notion, in the comments section below. Such is the beauty of the internet! 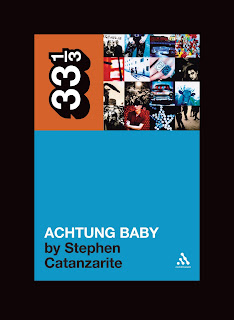 Nope. I haven't read the Dylan book yet, but the Beasties book is a class act from start to finish.

I've just finished reading Sam's book on Neil Young's Harvest, which I found to be quite good. The books seem most successful when they are more informative and less "gimmicky" (at least true for this reader).

I have to admit I found the Dylan book good but not fantastic, partially because there's just so much Dylanology out there that it didn't blow me away with new insight really, through no fault of the author.

Uh, the Radiohead book is pretty poorly reviewed on Amazon. I haven't read it, but I saw the author in a Radiohead documentary, and thought he seemed really smart. Go figure...

The Kinks book is one of my favorites - fantastic, and Erik Davis's Zep book is just brilliant. I find all the books, with all the different approaches to be quite interesting (I've read about a dozen of them). One of the most unusual 33 13's I've read was Franklin Bruno's book on Elvis Costello's 'Armed Forces' - a kind of hyper-hypertext of a book that uses Costello's literary and socio-political allusions to fine effect in constructing an appropriate approach to that album. John Darnielle's Sabbath book blew me away when I began reading it. Couldn't stop thinking that it was an amazing idea, and great writing - but, I ended up a bit disappointed. I think it's maybe just that the wow factor wears out by the time you are halfway thru the book and - maybe inevitably - the book can't keep delivering the same hit for all 101 pages.

John Darnielle's take on Sabbath may have wowed me even more in the second half, right around the time it moved from rage to heartbreak (rather like his music). The man's a genius.

Otherwise, it's a toss-up between the Beasties book and Kim Cooper's NMH oral history. I revisit them both. (Couldn't get through the Radiohead analysis.)

I'll say something not-nice about the Highway 61 book! It's one of the most pompous things I've ever read about Dylan, which is really saying something. The low point had to be the author's insistence that no one should laugh at "Desolation Row," even though the song is pretty obviously a bunch of punch lines strung together, like so much else Dylan was doing at the time.

U2 book is good and courageous and risk-taking and also intelligent and well-written. didn't agree with some of it, some of it ticked me off, but it was overall a good read. beasties book is very traditional approach but i would have to say overall my favorite just by sheer persistence of the author to dig up everything about the album as possible.

i've read the u2 book and agree it's essential for any fan. catanzarite engages "achtung baby's" christianity in a way that isn't dogmatic or supercilious.

As an avowed atheist and hopeless U2 fan (well, not of the last two records, they are horrible), I find this interpretation of Achtung Baby, though well-written, honestly, hateful.

How one of the most exciting reinventions/hugely adventurous records of modern times could be rendered so mind-numbingly dull by a Christian imposition really shits me.

Something completely different, Eric Weisbard's Use Your Illusion was brilliantly done, a great read with a top device -- writing the book based on decade old memories of the records and only listening to them in the last chapter. Awesome.

Due to my heavy graduate school load this semester, all of my pleasure reading has been 33 1/3 books before bed. So far this semester I've read "Meat is Murder," "Bee Thousand" (a new favorite book -- I'm from Dayton originally), "Daydream Nation" and now I'm reading "The Who Sell Out." Some of these posts about the U2 book, though, are making me very curious. I might have to pick a copy up soon and throw it in the pile.

I hadn't read much about the "Achtung Baby" book, so I'm a little surprised to read about how divisive it is. If nothing else, that gets my attention.

I agree with the poster above that the Neil Young book is a good one, even though it is perhaps a little heavy on the recording details (betraying the author's background as a studio engineer).

Drew Daniel's TG book, on the other hand, is dreadful, for the simple reason that it is too academic and intellectual of an approach to what is essentially simple music.

And in fact I've just noticed that the Neil Young poster above is Christian Kiefer. Loved your album with Sharron Kraus, Christian.

So far my faves are the Throbbing Gristle, Celine Dion , Captain Beefheart and Neutral Milk Hotel ones. The U2 one was enjoyable as well.

There aren't many that I don't like. I felt that the PJ Harvey one dragged and I'm not a big fan of the James brown one either.

I have to applaud the Anonymous Atheist above who was willing to both declare his bias and also praise the U2 book as being well-written. Obviously a hardcore atheist/anti-theist is going to be pre-disposed to disliking a book that makes no bones about its religious/spiritual perspective. The best compliments I can pay to this book is that a) it inspired me to go out and buy an album I was, aside for maybe two songs, unfamiliar with (and which I now love!), and b) it made me want to read more about/by the other writers cited in the book. I've actually developed a bit of a thing for Fulton Sheen, which surprises me -- a heavily-lapsed Episcopalian. I think the only reason the book might be considered "divisive" or "polarizing" is that it deals with both religion and politics -- the gasoline and matches of polite conversation. Yet I think the author does a brilliant job of it, putting his perspectives and ideas across in a clear and thought-provoking manner without ever preaching or sounding disrespectful of views or people he may not agree with. I hope we will hear more from Stephen Catanzarite. Agree or disagree, he's a talented and intelligent writer -- and he must have a set of stones the size of Texas to take on this subject matter and the U2 mythology.

U2's not my favorite band, and this album is morose...and I'd have to say that the Smiths is my favorite book in the series overall. But of the books I've read in the series (about a dozen), the U2 is probably the best written (it is downright poetic in some passages) and most ambitious, conceptually.

Just finished darnielle's master of reality book & holy fuck if it isn't one of the best things I've ever read. Beautiful & strange & made me cry a few times- a perfect example of what I'd like to see more of in terms of the fiction books in this series.

Ha thanks Richard. That's sweet of you to say. I like that record with Sharron a bunch as well.

I'm curious how many of us commenting are amongst the 400+ with proposals under consideration. I know I am (for Leon Russell's album "Carney"). I don't envy our erstwhile editors going through the pile o' mess we've made for them.

Popular misconception about the word 'erstwhile'. Most believe it to mean something along the lines of 'esteemed'; it actually means 'former'. And, of course, we want the Continuum editors to be our FUTURE editors - certainly not former!

I love Wilcken Low, that's another good one.

The volume on the MC5's Kick Out the Jams is one of my favorites.

Least favorite volumes are the Ramones debut (I'm actually kind of impressed that the author was able to dessicate such an exciting album), Patti Smith's Horses, and Jethro Tull's Aqualung. Also disappointed in the recent volumes in Gentlemen and Reign in Blood.

I've never heard anyone say anything bad about the Loveless and Low books---those two are the best ones I've read!

The Geoffrey Himes volume on Bruce Springsteen's Born in the USA is the best 33 1/3 book I've read so far. Himes makes a remarkably compelling argument as to why this is the best Springsteen album. I don't agree, yet still found his rather unorthodox arguments incredibly persuasive.