Struggling to come up with the perfect gift for the movie lover in your life? I suspect we can be of assistance!

Clive Young's book Homemade Hollywood: Fans Behind the Camera is just out - a genuinely entertaining and informative history of fan filmmaking, from the 1920s to the present day. In the words of Annalee Newitz on io9:

"Terrific...an absolute pleasure to read. If you're interested in fan movies, or the subterranean world of Hollywood, it's a must-read."

Or how about this review, by Christopher Mosher, on Comic Book Bin:

"...And that is the best thing about Homemade Hollywood – the stories. It doesn’t matter if you’re into fan films or even film at all. If you broke down the layers of Clive’s creation what’s left is quality stories than no one could make up in a million years from their own imaginations. Some are true underdog stories. A perfect example is the frame for frame remake of Raiders of the Lost Ark fan film. This film was put together by a group of kids during several years as a fun project during their childhood. They did some crazy and admittedly stupid things to get the film completed. But making that film was only half the story. The meat is how these friends drifted apart and lost touch to start new chapters in their lives, some of those chapters being darker than others as one of the members had a drug problem which he did overcome. What makes this story really magical is the fact that their film resurfaced in their adult years getting notoriety to the point where Hollywood is in the process in making a motion picture based on their experiences. How is that for life imitating art or is that art imitating life? There are dozens of stories just like this one from front cover to back that made me smile or even laugh out loud a couple times.

I would close with telling Clive he knocked this book out of the park, to use a tired baseball metaphor. I’m not what one would call well read, but I had a hard time putting Homemade Hollywood down. Normally I have the attention span of a five-year-old so believe me that’s saying something."

Or perhaps this, by Jeremy Hanke in Microfilmmaker magazine:

"...If I had focused more on my fanhood over the years, I might well have combined my filmmaking passions with my passion for the books and shows I loved. In doing so, I would have been much like the inspirational people found in Clive Young’s Homemade Hollywood: Fans Behind the Camera.

Mr. Young’s book is a historical narrative that follows the rise of fan films from the 1920’s to their climax in the 1990’s and today. While it might not be a how-to book like the ones we normally review, per se, it is an amazingly inspirational book for filmmakers to read. In fact, in my opinion, it ties for best inspirational read with Rebels on the Backlot, the book which chronicles the rise of Independent filmmakers who infiltrated Hollywood in the ‘90’s to create classics like Pulp Fiction, Being John Malkovich, The Matrix, American Beauty, and Fight Club.

Mr. Young focuses on people who are crazy enough to put their lives and reputations on the line to make illegal movies that they can never profit from and, depending on the mores of Hollywood, might not even be able to show in public. Most of these filmmakers are micro-budget filmmakers, but because they are using copywritten characters and concepts, they can never recoup any of their expenses, having to release all of their work on the internet for free to avoid legal repercussions. The most they can hope for is that, if their work is good enough, they will find their own fan following or they might attract the attention of someone who works at the companies that make their favorite franchises who might give them a job.

It takes serious passion to create films with these limitations, and Mr. Young takes you through their history with respect and admiration that is inspiring and encouraging to all low-budget filmmakers." 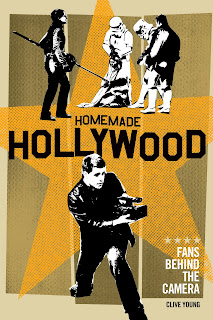 Keep up the great work. I love all the blog mashups.