A very sad moment on Sunday, with the death of Miriam Makeba - who suffered a heart attack after a show in Italy. In the words of Nelson Mandela, it seemed only right that her last moments were "spent on a stage, enriching the hearts and lives of others - and again in support of a good cause."

Miriam Makeba did not fall off the musical map when she went to Guinea-Conakry. Instead, she landed in a West Africa where cultural nationalism and generous patronage for culture were important features of the construction of the new postcolonial states. Indeed, when the apartheid regime withdrew her passport, several African states had offered her diplomatic papers. So Makeba was able to tour, to sing, and to write new political songs, and to communicate about South Africa at the highest level, to the heads of states becoming important in the Non-Aligned Movement.

Her own music flowered as a result. In the reissued Miriam Makeba: The Guinea Years, she finds again the range of voices that she sometimes left on the shelf singing African folk with Harry Belafonte. Singing in nine languages, she creates sound as well as song, reaching for fuller, deeper, and hoarser tones. With aplomb she selects the right floating praise verses in the role of traditional djelimuso, and gets tight jazz swing from backup players, including the doyen of manding guitar, Sekou "Diamond Fingers" Diabate. She was, in fact, doing exactly what she had done in South Africa: selecting the best musicians and working with them to shape a new sound from traditional, neotraditional, and jazz raw materials. Quite how influential this was on African female singing styles is only now being acknowledged. Asked to name their early influences, singers as diverse as Angelique Kidjo, Oumou Sangare, Tshala Mwana, and Sally Nyolo have all mentioned records by Makeba as an inspiration. 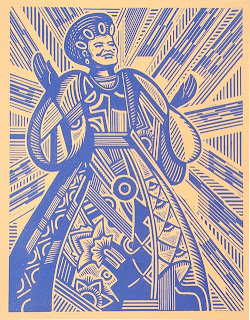 (Relief-block print of Makeba by Stephen Alcorn)
Posted by David at 7:05 PM