I'm thrilled that Jeffery T. Roesgen's book about the Pogues is now available from your local 33 1/3 vendor, as well as all the usual online places.

We've had, up to now, quite a few "making of" books in the series, and a handful of fictional treatments. This is the first book to combine the two approaches - interspersing track-by-track analysis of the album (and interviews with most of the band) with a miniature epic that places those same bandmembers on a fateful sea voyage from France to Senegal in 1816.

Here's the back cover copy:

"The band heaped their cases and bags into the corner of a small tavern and came to rest around a table. Some of them continued to sing, while others put their brows to the table and slept. After some time Cait, the sole woman in the band, rose and nodded to her group. She collected a bag and a bass and left with a man in glasses and a black hat who'd been standing along the wall. Voice by voice, the band's songs diluted into the commotion of the tavern room. Soon, there'd be more songs to sing, but for now there'd be rest; the kind that all trodden men must indulge."

To listen to Rum, Sodomy & the Lash is to be taken on a sea voyage with a cast of rabble-rousers, rovers, dreamers and revolutionaries. Released in 1985, the Pogues' second album seamlessly bounds between oceans and centuries, composing and culling stories of common people - their vices, suffering and urges, their misadventures and victories. With the vital ode of Celtic folk music and the abandon of punk, the Pogues frame their tales with a spirit that's at once firebrand and solemn. Through the epic imagery gracing the cover to the cast of souls introduced in the songs to the Pogues themselves, Jeff Roesgen's celebration of Rum, Sodomy & the Lash intertwines a seafaring fictional narrative with band-informed accounts of the creation of this unique and enduring album.

Jeff Roesgen writes fiction and about music for tinymixtapes.com. He lives in Cincinnati, Ohio, with his wife and two children. 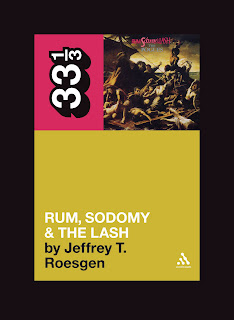