New Book: I Shot a Man in Reno

I'm pleased to announce that Graeme Thomson's wonderful book looking at how pop music has treated the subject of death, over the decades, is now on sale in North America, and will be available in the UK and Europe in October.

It's called I Shot a Man in Reno: A History of Death by Murder, Suicide, Fire, Flood, Drugs, Disease, and General Misadventure, As Related in Popular Song, and you can buy it here from Amazon.

The book has already been very nicely reviewed in Signal to Noise, from which:

"Over the course of this thoughtful essay, Thomson... is a surefooted guide through the musical graveyard. His writing is never dry or academic, but he smartly puts each song into its sociological and psychological context. It's fascinating to see how concepts of death changed over the decades, as Thomson points out trends such as the explosion of death songs during the psychedelic era.... He makes excellent use of quotes from some A-list songwriters; he interviewed Mick Jagger, Paul McCartney, Will Oldham and Nick Cave, and he draws on other sources for remarks from other musicians..... At first, it may seem puzzling that songs on this grim topic have become hits and even popular standards, but Thomson persuasively shows that death very much belongs in pop music."

And there was also a fine review in Booklist:

"The long subtitle is a tad inaccurate. This isn’t a history; it’s a commentary. Damned good one, too, by a journalist who knows his stuff and struts it by spanning recorded death ditties from the English folk song “John Barleycorn,” which covers its morbidity by “really” being about growing and preparing the ingredients of beer, to gangsta rap. Refreshingly, he refrains from rock-critic snideness in chapters focused on the teen death songs of the 1950s and 1960s, murder ballads, metaphysical trips to the other side from the high ’60s, suicide songs, afterlife musings, gangsta’s urban reclamation of the murder song, and mourning songs. He wisely sticks to the genuinely demotic song tradition, ignoring the so-called classic popular songs of Tin Pan Alley and the musical theater (the work of schooled composers), and primarily to the products of that tradition’s commercial devolution since the rise of sound recording. Enthralling from the first page, he guarantees rereaders with a penultimate chapter on Europe’s top 10 funeral songs and an appendix of his own, an annotated top 40 of death."

I really hope you enjoy the book! 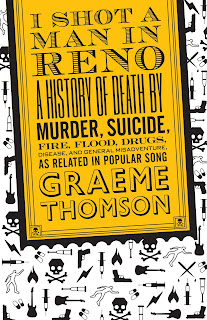