A few of you have been waiting for Geeta Dayal's book on Brian Eno for quite some time...and you'll have to wait just a little bit longer, as will I. But you should be pleased to know that we're getting very close now to having a finished manuscript, and here's a draft of the Introduction, to tide you over.

When I initially set out to write a book on Brian Eno, I didn't realize what a massive endeavor it would turn out to be. This short book has taken several years to write. I wrote, rewrote, threw out entire chapters, and started over more than once. Every idea fanned out into ten other intriguing ideas, and eventually I found myself enmeshed in a dense network of thought. Finally, I realized that I had to pick a direction and run with it, or risk never being finished.

Sometimes a good way to begin a drawing is to first carve out all of the negative space. So I will start out by telling you what this book isn't. This is not a rock biography that meticulously documents the making of Another Green World. Nor is it a book that dwells very much on Eno's personal life. It certainly touches on both of these things, to the extent that they are useful in creating a larger picture. This is a book about process. How did these songs grow from kernels of ideas into fully-formed pieces? How were these kernels of thought formed in the first place? I attempt to examine the confluence of ideas at a certain time in a certain place in the 1970s, and how these notions helped to shape the form of three records, all released in 1975: Another Green World, Discreet Music, and Evening Star.

My own background is in the sciences, and I approached this book as a sort of scientific experiment. I came up with hypotheses and tested them by doing research. Sometimes these hypotheses were wrong, so I went back to the drawing board. I did a lot of interviews, read a lot of books, and spent a lot of time thinking and listening. I spoke with dozens of people; one of the great gifts of writing a book on Eno is getting to interview some of the very interesting collaborators that he has worked with over the past thirty-odd years. I wasn't just interested in speaking with those who worked on Another Green World; I wanted to learn more, in a general sense, about how Eno worked with other people.

I read dozens of books on a number of different subjects -- from visual art to cybernetics to architecture to evolutionary biology to cooking to tape loops -- for inspiration. Of course, I read books about Eno as well. But many of the most helpful books for understanding Eno's methods are not explicitly about Eno at all. They are books like Christopher Alexander's A Pattern Language, Stafford Beer's The Brain of the Firm, and Michael Nyman's Experimental Music. What these books have in common -- besides being books that Eno rates highly -- are that they unite a variety of seemingly disparate things, and lay out general principles for thinking about these things. In this book, I look at how Eno devised his own sets of tools for thinking, such the "Oblique Strategies" cards he created with Peter Schmidt. (I used a deck of these cards myself while writing this book, whenever I reached an impasse).

Of course, there is the music. In the chapters that follow, I dig into some of the many unique sounds on these records. This is not any kind of formal musicological analysis. What it is, instead, is an exploration of the sonics--the timbres and layers of shifting textures. I spend more time on sonics than I do on the words. Eno has stated many times that lyrics, especially at this time period in his life, did not interest him very much. But that does not mean that words did not serve an important function. Using some ideas from cognitive science, I probe two different phenomena at play in Another Green World. The first, as Eno himself has pointed out, is that only five out of the 14 tracks on Another Green World have words, but that listeners tend to perceive the album as a "song record," not an ambient record. Each song with lyrics "bleeds" into the surrounding ambient tracks. How does this effect work in our heads? The second phenomenon has to do with another type of sleight of hand -- how chains of words, even nonsense words that do not make any sense in sequence, can nonetheless generate distinct, powerful images.

One of the most instructive things I did was to listen to Another Green World at a number of different speeds and volume levels, most selected arbitrarily. Each time I heard something new that I had not heard before -- a new sound that was buried in the mix, for example, or an effect, a heavily layered backing vocal, an abstruse lyric. Speeding up and slowing down Discreet Music taught me a lot, too; the first track of Discreet Music, or "Side A" if you happen to own the vinyl copy, is recorded at half-speed. So I listened to it at double-speed, to gain some insight into what the original material might have sounded like before Eno slowed it down. I also listened to it at quarter-speed, which I liked even more than Eno's half-speed version.

I still have not tired of these albums, though it is in fact very possible that I have listened to Another Green World more times than Eno has. I become more drawn to these albums the more I listen. The longevity of Another Green World is, in a large part, due to the album's innate ambiguity; the more you listen, the more beguiling and open-ended it becomes. In contrast to many other albums released in the mid-1970s, Another Green World does not sound dated. It isn't stuck in the past or fixated on the future; it continues its life in the fabric of the present. 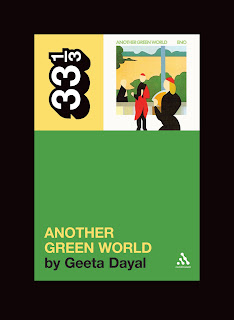 Speaking of waiting, I know a bunch of people (myself included) that would love to see the release of the Nine Inch Nails book by Daphne Carr. Any information on that? Thanks.

Good question. Last I heard from Daphne, she was perilously close to getting the manuscript finished - I'd love to get this one published as soon as we possibly can!

Well, thanks for the info! The fact that you can pre-order it on Amazon again seems like there's a bit of hope.

Wow, this sounds very intriguing and cerebral, I'm really looking forward to this one. My favorite aspect of the series is that each author takes a different approach and this entry really solidifies that.

Anonymous said...
This comment has been removed by a blog administrator.
3:23 AM

time to geeta move on, ms. dayal and publishing dudes. put it out already!

Such a nice post, it is really interesting, want to admire you, you are really a hard worker guy, Thanks.