Axl Rosenberg of Metalsucks has posted a great interview with DX Ferris, author of the Reign in Blood volume in the series.

You can read the whole interview here, but I'll give you a little taster right now...

Was there anyone who declined to participate in the process that you really wish you could have spoken to?

Not everyone I asked said yes, and not all the people who said yes came through – but honestly, except for Hatebreed’s Jamey Jasta, who’s this generation’s host of Headbanger’s Ball, I hit all my wish list. And that kinda surprised me – I got the whole band, management, Rubin, Wallace, Larry Carroll the cover artist, Tori Amos, Kat Von D came through. I didn’t think I’d get Russell Simmons, but that came together.

Dave Grohl woulda been nice – he’s a metal guy, but he’s got more money than God, and it’s not like I’m half a big name; I offered one publicist six bucks and two mix tapes if he could hook me up with him, but no dice. Kreator, their people said they were in, but it didn’t happen. Tom G. Warrior from Frost – but I guess he was having other issues to deal with. I tried to get Vinnie Abbott, but no dice there. Derek Riggs from the Iron Maiden covers didn’t want to talk about someobody else’s work, I guess. Or maybe I am a douche. 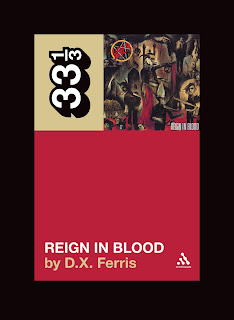 My friend James transcribed the lyrics of Angel of Death from memory during a sermon in a Presbyterian church in wasteland Northeast Philly. I quickly memorized them too -- this would have been 6th grade, maybe 1990. God bless Slayer. You just sold a copy.