Available and on sale now is volume number 55 in the series, which comes in a delicious shade of blue. The book is available from all the usual stores that carry the series, and from Amazon right here. In the meantime, here's the back cover copy:

That Patti Smith was operating in a different realm entirely to that occupied by her sisters in the genre was made obvious when one removed the vinyl from its plain paper sleeve. Placing the record on the turntable, putting the needle into the groove, none of the ritualistic operations of the act of listening to a record could prepare the listener for the visceral and intellectual disturbance of "Gloria (In Excelsis Deo)." A live highlight from the CBGBs sets, the song's opening lines, adapted from the poem "Oath," have lost none of their power to shock.

Horses, to many of those who heard it upon its release in late 1975, was a revolutionary album and marked the debut of an astonishing talent. Here, British scholar Philip Shaw details the early life and career of its creator, Patti Smith, looking closely at her poetry and performances from the early 70s through to the album's genesis. The result is an insightful and revealing study of one of rock music's landmark records and the artistic milieu from which it sprang.

Philip Shaw is a Reader in the English Department at the University of Leicester, where he specializes in the teaching of nineteenth-century literature and critical theory. In his spare time he writes songs and plays guitar in the group Alberteen. 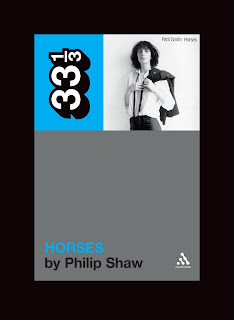