One of the many fun aspects for me of working on this series is not just discovering some albums that I'd never really heard before, but falling in love again with records that were a big part of my life some time ago.

Jeff Roesgen's manuscript for his book on Rum, Sodomy & the Lash, which we'll be publishing in the second half of this year, has me falling ass over tit for this album - so much so that if you held a musket to my head today and asked me to name my favourite record of all time, I'd cheerfully nominate this one.

A third of Jeff's book documents the making of the album, with input from all of the Pogues except Shane and Cait. The other two thirds, woven through the narrative, place the band on board The Medusa as she makes her fateful voyage from France to Senegal. It's a remarkably effective technique. I'd always thought of this record as a product of the post-punk politics of 1980s England and Ireland - but by placing the band in the early 19th Century with a surrounding cast of soldiers, officers, navvies, as well as profoundly incompetent members of the ruling class, Roesgen highlights the extraordinary achievement of the Pogues on this album. It's a glorious celebration of the underdog, of the destitute and the downtrodden.

Below is the great painting by Gericault, that the band adapted for the album cover. 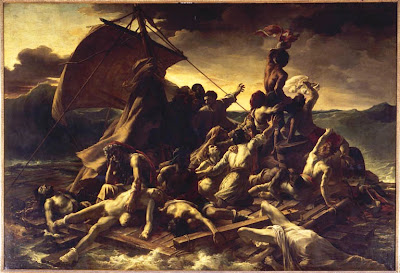 And here's a very short fan clip of "I'm a Man You Don't Meet Every Day" from a 2004 Brixton Academy show, which should send shivers down your spine, if you have one.

Wow this is so cool.

I just discovered your blog via blogger. Great name, great subjects. I'm enjoying reading though your posts. I'm impressed by the variety of music covered (including plenty that I have no clue about). It is certainly unusual to see references to Celine, PJ, Zep, Slayer and Sabbath in such close proximity. Talk about eclectic! (or sing about it: "I Sing of the Blogger Eclectic"). See ya around!

jeff roesgen is an amazing writer! can't wait to read this.

RS&L wouldn't have been my first choice for a Pogues 33 1/3 book (that would be If I Should Fall From Grace With God) but I'm definitely looking forward to this one. Has a truly great book been written yet about the Pogues? The band is certainly the stuff of great literature - especially Shane.

Regardless of how talented they might be, do you really want to support a band that sells its wares using sodomy as if its something to be lifted up? Have you ever been sodomized?! It's excruciating and the effects last a very, very long time. Often it is accompanied in rape and drunkeness. No laughing matter.

congratulations for being selected in blogs of note

FWIW anon, I don't know if the band meant this, but R,S&L is a lift from Winston Churchill. As I heard it, a British muckety muck accosted Winston when he ran the Admiralty and had banned flogging. The man told Churchill he was doing away with long naval tradition. Winston replied, "the only traditions in the Royal Navy are rum, sodomy and the lash. You'll still have two of them."

Excellent post, and better blog. The Pogues, especially Rum, were and continue to be a HUGE part of my life. On constant rotation.
Again, love the blog. Makes my little music blog pale by comparison...sigh...

Go to the link below to find out how to sign up to get free, easy video games, consoles, and much, more, from prizerebel.com.

Looks cool! Can't wait for the sequel (...Fall from Grace...). How about a Xmas release, as it contains the most shamefully underrated Xmas song around!

I remember buying the cassette like it was just yesterday. I remember reading how Elvis Costello basically hit the recording button and got out of the way. As much as I like Fall from Grace, it really can't hold a candle to Rum Sodomy and the Lash. Brilliant stuff. Cant wait for this!! Thanks for all you do

The album cover looks like real.The Pogues were a great great band at the beginning and the middle.I really like traditional music when mixed with rock n roll the way the Pogues used to do it.I like to enjoy my evening by reading this book with rum and cigars.I prefer to Buy Cigars online.