I'm delighted to announce that David Smay's wonderfully erudite and entertaining book on Swordfishtrombones (no. 53 in the series) is now on sale in stores around the country (despite the fact that Amazon, when I looked this morning, was still saying that the book has not yet released - it has). Update!! This is now fixed.

"At the end of the seventies Tom Waits felt trapped in a stalled career, his musical persona an artistic straightjacket. At a dark, desperate time in his life he got the phone call that offered a way out and met the woman who would change his life. What followed was Swordfishtrombones, one of the most daring transformations in pop music history."

Tom Waits is an elusive subject, sly and evasive. Through extensive research and a close, playful reading of his work, David Smay unwraps the vinegar pleasures of Swordfishtrombones and creates a freewheeling portrait of an American genius. This is the album where Tom Waits beats the blues with a hammer, drags his piano into the rain and burrows deep underground. This is the story of a man who reinvented himself and changed the musical landscape forever, a love story built on exotic percussion and phantom landscapes. This is a story about crows and mules.

David Smay has co-edited two books on music with Kim Cooper: Lost in the Grooves and Bubblegum Music is the Naked Truth. He has written for the Oxford American and has dithered about pop music on NPR, French television and documentaries only shown at the Alamo Drafthouse in Austin, Texas. His lives in San Francisco with his wife, Jacqueline, and two children, Emmett and Matilda. 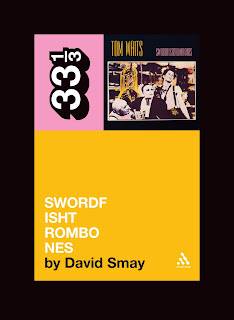 Funny that Amazon is claiming 'not yet released', as I got my copy January 17 (or 16th even). Maybe they just know I haven't read it yet. Ahem.

I'm glad to report that Book Cellar in Chicago (in the Lincoln Square neighborhood) already had it available for sale this past Saturday. Chicagoans, I urge you to resist the Amazon siren and buy indie.

David is a good friend of mine and I know he has been working on the book for quite some time (I remember talking with him, in the summer of 2006, about his research on Harry Partch, whose work was an influence on Waits). I'm happy to know the book is finally available.

I got halfway through the book on the bus this morning... it's revved up my love for ol' Tom to a feverish pitch. Thanks for this great book and the series in general; I really enjoyed the Loveless and OK Computer books, too.