I'm very pleased to announce that Drew Daniel's excellent book about Throbbing Gristle in the series (no.54) is now on sale at Amazon and many many other places.

"Just as the album cover flickers uncomfortably between extroverted, collective celebration and introverted, solitary withdrawal, the eleven songs bound by this image pinball unpredictably between group creativity and solo outbursts, between glossy pop and hastily scribbled improvisation, alternately firming songs up into solid structures and dissolving them down into a miasma of textures, moving backwards into pastiche and forward into futurism. Poised at the edge of the abyss, it's a record that can't make up its mind whether to jump or hold on."

Previous writings about Throbbing Gristle have tended to dissolve into lurid half-truths about deviance on and offstage; their actual recordings, lyrics and images have received comparatively slim analysis. Here, Drew Daniel creates an exploded view of this album's multiple agendas. On 20 Jazz Funk Greats, Throbbing Gristle modeled a critically new and highly promiscuous way of relating to or inhabiting musical genre - where punk rock was passionate and direct, TG were arch and mysterious, perverse and cold. Including original interviews with all the members of the band, this is a fascinating study of a highly unusual and enduringly influential group.

Drew Daniel is one half of the acclaimed electronic group Matmos. He teaches in the English Department at Johns Hopkins University, and lives in Baltimore. 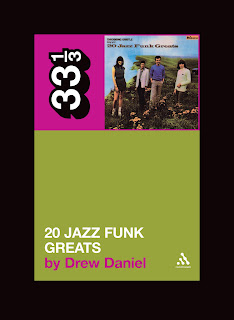 I had the pleasure of reading it this weekend to a soundtrack of 20 Jazz Funk Greats and related TG (which is cool as other TG material is mentioned too). I loved Wreckers of Civilisation, and Drew's book was just as enjoyable, touching on many other tangents to TG...

Loved the approach song-by-song to the LP and thought things were a bit more certain than some of the "facts" in Wreckers...maybe it was TG still existing (though was surprised no mention of Part Two - The Endless Not). Very amusing that Genesis P Orridge revealed he read the 33 1/3 on Piper at the Gates of Dawn...and the disco discourse was wonderful, as that didn't get advanced much in Wreckers...

One of my books of the year (already) and one of the most enjoyable entries in the series alongside In the Aeroplane Over the Sea, Meat is Murder, 69 Love Songs, Let It Be & Sign 'O' the Times.

Liked the idea of the 20 Jazz Funk Greats focus against the Wreckers biog. I think a similar approach could be made to a future 33 1/3 book on Sulk by Associates against the biog The Glamour Chase...