Just published is Stephen Catanzarite's book about Achtung Baby. It's a brave and compelling study of the album, and the first book in the series to take an openly religious angle. It's a fascinating read.

Like "One," "Until the End of the World" is also a conversation, this one between Jesus and Judas some time after the Crucifixion and Judas's suicide. Like the Inferno, "Until the End of the World" imagines Judas in hell. His circumstances and countenance, however, are quite different than Dante imagined, if no less tragic. Here, Judas is presented as something of a bon vivant, holding court in his little chamber of doom. He has all the affectations of what the philosopher Allan Bloom termed "debonair nihilism," a fashionable and stylish flirtation with oblivion that sees the world as an ironic joke and uses that as an excuse to live if anything goes. Nihilism is the belief that human existence has no objective truth, meaning, purpose, or value. In its "purest" form, it is usually associated with real violence and destruction of the physical, mental, and, ultimately, spiritual kind. Debonair nihilism is not the cold, dark, real nihilism of someone like Nietzsche, but a glib sort of indifference that seeks only fleeting pleasure as it slouches toward nothingness with a nod and a wink...Debonair nihilists are mere poseurs. "Give me oblivion," they proclaim, "but not right now."

"Until the End of the World" begins with the wail of the banshee and a muffled funeral cadence ushering the listener toward the portal of the Otherworld, the realm of the dead. As we move further down into the abyss we pick up speed, and the fuming riff of a panoramic guitar reveals the landscape of damnation. There we find Judas looking every inch the decadent sophisticate. He is all dressed up with no place to go, elegantly wasted on God-knows-what, and feigning a sort of sardonic surprise to the presence of Christ before him. Recalling the last time the two of them were together, Judas reminds Jesus what a cosmic party-pooper He was. Sure, Judas stole money from the group, and he may have even tried to slip Christ a mickey, but stuff like that happens between friends, right? Besides, Jesus had His own way of leading people on and getting them to do what He wanted anyway. And hadn't they once been as thick as thieves, as close as bride and groom?

Then Judas cuts to the chase, bringing up the moment he will think about for all eternity. That time in the garden, when he kissed Jesus? He was only playing around, having a bit of fun! Things just kind of got out of hand. It is a shame how it all went down after that, but really, what's the big deal? Was it the end of the world? No! Here is Christ before him, looking better than ever, and just think of all the good He was able to achieve because of Judas's little "mistake."

So what does Christ have to say? Up to this point he has been very quiet, content to allow Judas to speak his piece. The conversation has actually been more of a monologue. Then Judas begins to break down a bit, and we hear the still, small voice of Jesus gently repeating one word: "love." Had He come to tell Judas He still loves him? Or was He there to remind Judas how he had failed to keep the greatest of God's commandments, the one that says we are to love each other? Is He there to comfort and forgive Judas, or to pass everlasting judgment upon him?

Christ's words of love, whatever their intent at that moment, finally penetrate the glibness and cynicism of Judas's debonair nihilism. He makes his confession. He tells Jesus about the recurring nightmares he has been having, of how the sorrows he has tried to kill have only grown stronger, like resilient bacteria that mutate and become immune to antibiotics. Judas is infected, he knows that. The jig is up, the scoundrel has been found out. He is overcome with remorse and regret, but overjoyed at seeing his Master again. He reminds Jesus of the promise He once made, that He would be with His people always, even to the end of the world.

As the song moves towards its finale, things get a bit ambiguous. A hot, sharp guitar pierces the atmosphere like a lightning bolt. As the listener is ushered back through the gates and away from the realm of the damned, we hear chanting. Is it Jesus repeating His words of love or is it Judas moaning his eternal regret? It is impossible to say. What happens in hell stays in hell, and what happens between Jesus and Judas is a private matter. The song burns to an end and the door slams shut. A few faint traces of smoke rise and dissipate, and the echoes of the funeral drums trail off.

We have been to hell and back. Heavy stuff for a rock and roll song. 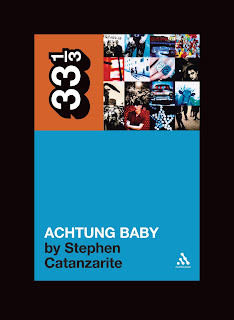