Pink Moon, on its way

We got the manuscript this week for Amanda Petrusich's forthcoming book about Nick Drake's Pink Moon album. The book covers a lot of ground - Drake's early career; the recording, release, and failure of the album itself, and the record's new life on the back of a VW car ad in 2000. That's where this extract comes from...

For record companies, the economics of advertising made sense. In 2000, the well-documented dip in record sales (long attributed to the rise of downloading and peer-to-peer file-sharing networks) meant panicked labels were trying to figure out new ways to shift albums, horrified that their entire business model would soon be rendered obsolete. “At that time, record companies were really starting to get hurt by Napster and other things. They were losing profitability,” Matt Miller, President and CEO of the Association of Independent Commercial Producers, explains. “One of the value propositions involved with advertising and licensing went off like a light bulb. They had these vast libraries [of licenses for songs] and their marketing budgets were going down, and here were marketers with already-bought air-time.”

“When we first started doing it, licensing a real band was a feat of social engineering,” former Arnold copywriter Shane Hutton explains. “There were a couple other agencies that were also trying, but [Arnold] found a way to do it the best – maybe our concepts were non-threatening to the bands. A lot of bands said no, but a lot of bands said yes. Now, there are a lot more licensing opportunities that come by my desk. It used to be one or two music houses that would put their D-level talent on the ‘For Advertising’ list, and we could get CDs of, like, Rick Astley’s brother’s band,” Hutton sighs.

“And I was like ‘I don’t want to put Rick Astley’s brother’s music on my spot at all.’ We would get the flotsam and jetsam from the music company, and it wasn’t what we were after. Now we get Beyonce’s album two months before it comes out. We get sneak previews of, like, P.O.D. – bands that never would have been considered for commercials before. Not that they’re so genius, but because they’re so ubiquitous in the mainstream and they don’t need any money and it just never would have happened,” Hutton continues.

“Sometimes there are integrity issues. But mostly I just think it’s about what’s selling and what’s not selling. It’s like the green grocer – ‘Gotta get rid of those grapefruits, they’re getting a little soft! Send ‘em to the ad people, they’ll eat it!’ But now we’re getting top-level talent, and people aren’t so freaked out by it. And I think that’s because more people are doing it – if I was in a band, I’d be like ‘Wait, you have a history of doing good work as an advertising agency, you win awards, you please people, you don’t do schlocky crap, I’ve looked at your reel and I like it. My record company is willing to offer me $75,000 worth of media placements on my new album. You’re willing to offer me, what? $4 million worth of media placement? You’re going to give me $4 million worth of media weight in this commercial that you’re gonna get Michael Bay to shoot? And you’re gonna link it to a website and people are going to be able to link to my website and buy it from me on my website for $10? Yes.’ I think a lot of bands are starting to figure out that it’s not going to hurt them if it’s done tastefully. And in a fragmented marketplace, a lot of bands just want some kind of exposure,” Hutton nods.

Hutton also acknowledges a handful of larger cultural shifts. “The other front to the impetus of change in this arena is hip-hop – just in general. In hip-hop, the words ‘sell out’ are a goal. It’s not a problem, it’s an intent. People are waiting for the dude to come by with the right about of money – and the dude after him, and the dude after him, and the girl after him. So you have hip-hop totally willing to sell out on one side – all their videos look like huge parties, everyone has money with their own face printed on the front, and it doesn’t look like that bad of a thing, they’re selling shoes, clothing, perfume. They’re in movies and shit, they’re a fucking enterprise. Then you have bands with ‘integrity’ on the other side, doing videos where they’re standing in the rain, in a mud field, talking about broken hearts and shit. And you’re like, ‘Uh, where do I want to be?’ So it’s changing. There are still bands that say ‘No! I would never sell out to a commercial, man, because I saw The Doors and I saw what happened to them and that fucking blows.’ But much less so – if I had to pick a percentage, I would say it’s at least 65% better than it used to be.”

“Think back to what was happening in advertising at that time,” Miller nudges. “Advertisers were facing a fractured media market. They were trying to engage consumers in ways they had never been engaged before. Primarily because they were entering into what would end up being a lifelong battle with other media – with DVRs, with the internet, with control being put into the consumer’s hands. Advertisers were trying to create small pieces of entertainment for their brand, and while the overall goal was still to sell, the method had to be much softer. It became more of a contract – you give me your 30 seconds, and I’m going to make it worth your while, because I’m going to entertain you. And if that proposition didn’t pay off for the viewer, they were gone. In 2000, we started to see the entertainment values in advertising reach new peaks. And one of the ways people have done that is licensing songs. It happens in many different ways – with popular songs everyone knows, like Led Zeppelin for Chevrolet or the Rolling Stones for Microsoft, or with a song that no one has ever heard. Advertising used to have three channels, and they had you – you had to sit there, and you had to sit through it. Now you don’t. So how are they gonna make you sit there? They’re gonna pay you with entertainment values. A lot of the time it’s comedy, but it can be other things – a beautiful picture, a little story being told, an emotional musical track,” Miller shrugs.

Advertisers were beginning to understand – and harness – the emotional draw of music. “Instead of just buying the recognition of a famous song, now agencies were buying an unrecognized song and counting on its catchiness or emotional wallop to hit a nerve,” Stevenson adds.

Obviously, for Nick Drake, the Cabrio commercial was more beneficial than exploitative, facilitating a second renaissance, bringing Drake’s name and sound to a considerably larger audience than he had ever entertained before. I ask Hutton if he was surprised by the jump in sales for Pink Moon. “It went from zero to a shitload,” Hutton says. “I know that. Nick was number one on Amazon.com for thirteen weeks or something like that, twenty-five years after his death. We knew people might want to buy it, because historically people had asked about buying other songs that we had used on-air. But each time you do [use a song], it’s a gamble. I would love to say we were fully aware of what was going to happen and everything went according to a checklist we had created, and we expected the phenomenon, but you can only throw the dice on the table – you can’t predict the numbers. We knew some people were gonna want to buy it – but no one was prepared for how many.” 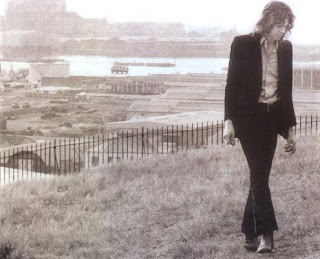 good stuff. Looking forward to this one. on the subject of music in car adverts, how about the luxury car ad using the jam's "start." that was a shock. not because i give a flying you-know-what if a musician wants to license a song for commercial use (i am all for capitalism), but because the commercial surely gave the jam their largest promotion in America ever!

Interesting post, David. I look forward to the Pink Moon volume in what has been a consistently informative series. You might be interested in my own blog at www.sandydenny.blogspot.com where I talk up Amanda Petrusich in comments on "Cults and anniversaries" and Erik Davis (with reservations!) on "Led Zeppelin".

That Jam song was for a Cadillac commercial right? Funny. The same guy who did the Nick Drake commerical is working for Cadillac now. So at least he's still practicing what he preaches.