A couple of things for the start of the week.

1. There's an excellent little interview with David Mitchell in the online edition of the The Hindu, in which Mitchell (yet again) transmits his secret, unspoken, one might even say unknown desire to write a volume for the 33 1/3 series:

David, what would you say is the significance of music in your work — structurally, thematically, inspirationally?

It’s a cloud rather than a question isn’t it? But an important and beautiful cloud. I couldn’t conceive of a life without music. Music is one of the major means by which I understand the human heart. Pop songs — they’re so good at human emotions. The best ones are. Of course 97 per cent is crap, but three per cent is imperishable human expression. The song reminds me of how articulate you can be if you master your art sufficiently. The song and the poem. It’s also a very studiable chunk of art. You can ask yourself about a song — why does that move me, why is that so clever, why is that phrase so retentive? And you can figure out the answers to these questions as well. They’re good places to study art in the abstract. Number 9 Dream was written under the musical spell of Kate Bush and John Lennon. Music is exactly like what St. Augustine said famously about Time, "I know exactly what it is until someone asks me to explain it." If you could explain it you wouldn’t actually need the music, which makes it a fascinating, inebriating bar conversation but a tricky interview question.

You can buy the book from Amazon.co.uk here. And here's some copy about the book:

Blind Willie McTell, 1903-1959, was one of the most gifted musical artists of his generation, with an exquisite voice and a sublime talent for the twelve-string guitar. As Bob Dylan wrote, "nobody can sing the blues like Blind Willie McTell" - yet his repertoire was infinitely wider than that. Why, then, did he drift in and out of the public eye, being 'rediscovered' time and again through chance meetings; and why, until now, has so little been written about the life of this extraordinary man? Blind from birth, McTell never behaved as if he were handicapped by his lack of sight and he explodes every stereotype about blues musicians. Michael Gray has travelled the American South and beyond to unearth the fascinating story of McTell's life - uncovering the secrets of his ancestry, the hardships he suffered and the successes he enjoyed at a time when recording contracts didn't lift you out of singing on the street. In this personal and moving odyssey into a lost world of early blues music, a vulnerable black population and more, Gray peels back the many layers of a tragic, occasionally shocking but ultimately uplifting story. 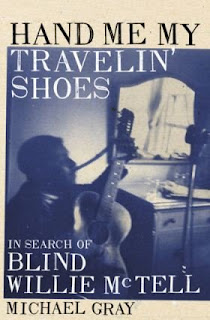