Friday evening was a bittersweet one for team Continuum. Several of us went to the ceremony for the National Book Critics Circle Awards, hoping for our man Jonathan Coe to pick up the prize for Biography of the Year. No such luck. The winning biography was this, about Robert Oppenheimer. The two authors had apparently been working on it for 25 years, so fair enough...We'll win something next year.

We did sit very near to Joan Didion, which was a thrill. (She didn't win, either.)

Then four of us cabbed it up to Times Square for the Belle and Sebastian show at the Nokia Theatre. 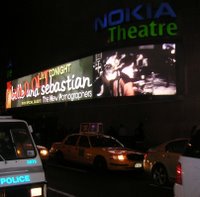 Hadn't been to the Nokia before, but damn - it's like walking into an upscale hotel! A very well put-together venue. The New Pornographers were perfectly decent, while Belle & Sebastian were spectacularly good. It almost beggars belief how much they've changed since the early shows - Stuart and Stevie are quite the double act these days, and Sarah very quietly holds the whole thing together, without anybody really noticing. The setlist consisted almost entirely of very old songs and very new songs, and threw up some astonishing combinations: an utterly gorgeous "The Boy Done Wrong Again" followed by a dumb, delirious "The Blues Are Still Blue", for example. I miss the ramshackle bumbling mumbling charm of yesteryear, but B&S in 2006 are simply much, much better.
Posted by David at 8:24 AM

You summed up the Belle & Sebastian show perfectly. Seeing them perform "Your Covers Blown" so amagingly well makes it seem like you're watching a different band than one who used to stumble through every song. Part of their charm at the time, but songs as wonderful as theirs deserve to sound just as great live as on record.

Thanks for these words of encouragement. I'm approaching my first ever Belle and Sebastian show with quite a bit of fear. As a super-fan for nearly 10 years (good god, has it really been that long) who has found his interest in the band waning over the last three albums, I fear that seeing them in concert will be the final nail in the coffin.

Now, I have a renewed interest in making the effort to get to the theater.

Made to Be Broken said...

just wondering if you would link to my blog