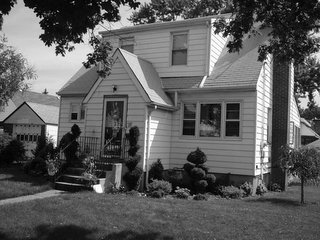 Kim Cooper's nearly-printed book about Neutral Milk Hotel is the first in the series to contain a decent selection of photographs. (The Pink Floyd book has a couple, but that's about it.)

Here are a couple of them. The one on the bottom (courtesy Laura Carter) is a live band shot; the photo on top shows a place that was affectionately known to the band as "Grandma's House" in New Hyde Park, NY, where they spent several weeks rehearsing, writing, and hanging out in 1996. The "Grandma" in question is Julian Koster's maternal grandmother who, as Kim writes in the book, "was so hard of hearing that it didn't matter how much noise Julian's friends made."
Posted by David at 2:42 PM