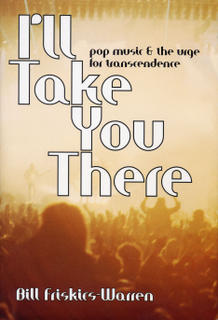 The second extract from Bill Friskics-Warren's new book I'll Take You There: Pop Music and the Urge for Transcendence is taken from Chapter 2, "Sexual Healing, or Somethin' Like Sanctified" - in which Bill looks at Marvin Gaye, Al Green, Madonna and, in this particular passage, PJ Harvey. Here's Bill:

Harvey’s gift for mythopoeia is virtually unrivaled in pop music, certainly in the post-punk era. Over the course of a half-dozen albums she has donned myriad personae, from male and female to phantasmal, reinventing herself as everything from a whore and an agent of God to a fertility goddess and a she-Godzilla. Harvey has drawn some of these guises from the Bible and from her native Anglo-Celtic folklore, others from the images of surreal creatures that she gleaned from her parents’ blues, Jimi Hendrix, and Captain Beefheart records. All, however, are sensual and mystical to their core. Take, for example, the salacious “Long Snake Moan,” a “cock rock” update of the blues that dwarves even that patented by Led Zeppelin, a band whose monumental stomp-and-swagger Harvey’s music sometimes evokes. “Hell’s door, God above / All drunk on my love / Now won’t you hear my long snake moan,” she roars over a gargantuan guitar riff, before exulting, during the orgiastic maelstrom that closes the track, “It’s my voodoo working!”

Harvey’s is a music of excess and extremes, of relentless tension and release that turns on heart-stopping screams, caterwauling guitars, and abrupt shifts in volume and tempo. Sometimes these torrents convey the ecstasies of sex. More often, though, they betray pain and discomfort, whether it is born of Harvey’s feeling of being trapped in her body (a recurring theme, and likely the root of her perpetual makeovers onstage and in photos) or of her straining against the constraints of a repressed, misogynistic society. “Must be a way that I can dress to please him,” she broods in “Dress,” her churning debut single. “It’s hard to walk in a dress, it’s not easy / Spinning over like a heavy-loaded fruit tree / If you put it on / If you put it on,” she continues, “investing the act of adornment with both a threat and a dare." Harvey takes the opposite tack on the record’s thrashing follow-up, “Sheela-Na-Gig,” throwing her paramour’s sexism back in his face by spreading her labia at him in scorn. In “Rid of Me,” seething at the lover who has spurned her, she warns, “You’re not rid of me / I’ll make you lick my injuries,” before unleashing waves of crashing noise that sound like they could swallow him whole.

Harvey’s mystical predilections often enable her to transform pain into a vehicle for transcendence, something that is especially pronounced on her serrated early albums. “I’ll make it better / I’ll rub it ’til it bleeds,” she vows on the quasi-transgressive Rid of Me, while on Dry, her chafing debut, she sings, “I’m happy and bleeding for you.” There is a measured quality to Harvey’s vocals, and to the looping guitar figure that she plays here—a serenity even—that belies any irony that her claim might possess. Something similar is at work in “Ecstasy,” one of several lacerating blues pieces from this period. “Harvey takes for granted that eroticism hurts, that nothing pretty comes of giving over to love’s irrational pull,” wrote Ann Powers in “Houses of the Holy,” her marvelous essay on Rid of Me.

Powers went on to place Harvey and her rapture-induced shape-shifting, most notable in the likes of “Man-Sized” and “50-Ft. Queenie,” in the tradition of the female mystics who, trying to break free of their bodies and of their body-reviling societies, underwent startling transfigurations to satisfy their hunger for the divine. “Holy women of the Middle Ages typically experienced their faith in terms of bodily transformation, partly self-induced, but ultimately mysterious,” she wrote. “Stigmata, elongation or enlargement of body parts, levitations, and catatonic seizures proved the union with Christ that these women attained, although such symptoms rarely visited men. Accounts of these miracles …suggest that women could actually change form, if only momentarily, and so push through the limitations of their traditionally scorned and feared female bodies.” Harvey, Powers continued, “cultivates that same shape-changing power.”

The object of Harvey’s yearning might not be the conventional deity embraced by her medieval foremothers—or, for that matter, by her predecessors Marvin Gaye and Al Green. Harvey’s is more of a postmodern quest, much as it is for Madonna, for self-transformation through sensuality—indeed, for sexual liberation—than a striving to be united with a personal deity (or even a transpersonal one). Yet there remains, as large portions of To Bring You My Love and its successor, Is This Desire? attest, a pronounced spiritual, and at times theological dimension, replete with images of heaven and the divine, to Harvey’s eroticized vision of redemption. More than just an end in itself for her, sex possesses the power to transport body and soul, temporarily satisfying her transcendental urges and bringing a measure of peace, as she sings in “Dancer,” to her “black and empty heart.”

Is This Desire? is more ruminative than To Bring You My Love, its music more ambient and subdued. Harvey’s protagonists and their meditations on the question that the record poses, however, are just as obsessive. In “Angelene,” invoking a virgin-whore dichotomy akin to the one that Madonna has employed, Harvey plays a devout prostitute who, with a mix of tranquility and longing, confides, “I see men come and go / But there’ll be one who will collect / My soul and come to me.” Sounding a more desperate note over the barren title track she wonders, “Is this desire enough / Enough to lift us higher / To lift above?” In the ironically-titled “Joy” she mourns for a solitary woman of thirty who is leading “a life un-wed.” This reference is not to marriage per se, but to a life bereft of faith, hope, and joy, a life in which unfilled desire is an abiding and crippling condition.

Harvey has cautioned in interviews against reading details about her love and sex life into her music, but given her career-long obsession with desire and its discontents, it is hard not to hear her talking about herself in the likes of “Joy.” Most of her records in fact sound like they were made in the wake of romantic break-ups. Whether or not this is the case, 2001’s Manhattan-inspired Stories From the City, Stories From the Sea brims with a sense of spiritual and sexual rebirth hitherto unheard from Harvey. Rumor had it that she made the album during the first blush of newfound passion, and from rooftop waltzes at midnight to blissed-out epiphanies like “I can’t believe life’s so complex / When I just wanna sit here and watch you undress,” the feelings of renewal that she conveys here border on wonder. Yet even on this latter track, a throbbing anthem called “This Is Love,” there remains a current of doubt. “This is love I’m feeling,” Harvey sings. “Does it have to be a life full of dread?”

Dis-ease returns with a vengeance on 2004’s Uh Huh Her. The music on the record ranges from dirty guitar noise to brooding murk, with an occasional swatch of melody to part the gloom. And the likes of “The Desperate Kingdom of Love” and “The Darker Side of Me and Him” still find Harvey plumbing the meaning of desire, however much it might be in retreat. In “The Slow Drug,” its title an allusion to that elemental longing, she seems to view this undertaking, for all its sexual and spiritual worth, as her vocation. “Headlights burning / Looking out for something / Something that we’re needing,” she muses evocatively to the restless cadences of what sound like a synthesizer and a violin struck with a bow. “Still,” she goes on, “the question lingers / I twist it round my fingers / Could you be my calling?”

http://www.master-the-guitar.com, www.Master-the-Guitar.com . Want to learn to Play the guitar in a weekend. Geoff reveals Everything you will ever need to know about how to learn the guitar in a weekend revealed. Register to receive the details by return.Geoff also reveals a resources website where you can find all the latest Guitar equipments and Music in one location at. http://www.guitarist-resources.com