Kick Out The Jams 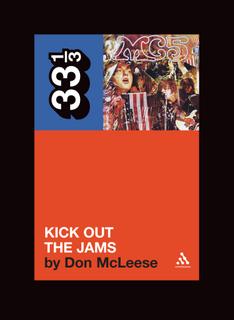 Here's another of the new books that's shipping out from our warehouse in Harrisburg as we speak: Don McLeese's excellent volume on the MC5.

"We hadn't known what to expect, but none of us had expected the 5. Almost none of us had ever heard of the band, except those who had made the drive from their native Detroit. Though we thought we'd been ready for anything, the frenzied, ear-splitting performance left most of us shellshocked. It was a musical mugging so far beyond the realm of expectation that it would take years before punk or metal would provide some sort of frame of reference, though no punk or metal band would ever match the galvanizing force of the 5."

When Kick Out the Jams was released in early 1969, the MC5 found themselves at the crux of a contradiction that rock has yet to resolve: how do you subvert the values of corporate America when you are subsidized, packaged, produced, and promoted by corporate America? The MC5 thought they had a license from Elektra to shout "Motherfucker!," preach militancy, and issue proclamations vowing a "total assault on the culture by any means necessary, including rock and roll, dope, and fucking in the streets." They quickly discovered otherwise. Here, Don McLeese tells the story of one of the most hyped, controversial, and polarizing albums in the history of American rock music.

Don McLeese is an associate professor, School of Journalism and Mass Communication, University of Iowa, and a senior editor at No Depression. He was previously the pop music critic for the Chicago Sun-Times and the Austin American-Statesman, and he has written for many music and general interest magazines.