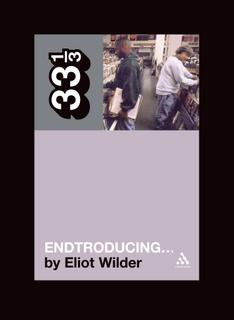 Just in stock, and releasing from our warehouse next week - should be on sale from early September onwards at the usual places.

"What resonated about Endtroducing... when it was released in 1996, and what makes it still resonate today, is the way in which it loosens itself from the mooring of the known and sails off into an uncharted territory that seems to exist both in and out of time. DJ Shadow is not only a master sampler and turntablist supreme, he is also a serious archaeologist with a world-thirsty passion (what Cut Chemist refers to as Josh's 'spidey sense') for seeking out, uncovering and then ripping apart the discarded graces of some other generation and weaving them back together into a tapestry of chronic bleakness and beauty."

Over the course of several long conversations with Josh Davis (DJ Shadow), Eliot Wilder digs deep into Shadow's early years in California, finds out about the friends and mentors who helped him along the way, and discusses the genesis and creation of Endtroducing..., Shadow's widely acknowledged masterpiece.

Eliot Wilder is a Boston-based writer and musician.
Posted by David at 1:46 PM