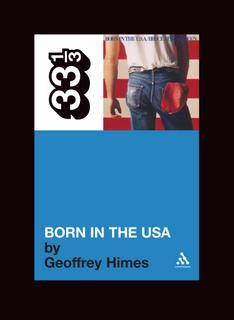 The final book in our quartet of new releases this week is Geoffrey Himes' monster tome (relatively speaking, of course, but I think it's the second longest in the series, behind Erik's) on Born in the U.S.A.

"Bruce Springsteen is best known for his most public acts. It's in the concert hall - more than on the stereo or the screen - that he engages his audience as few other performers ever have. And yet, the most important moments of his career have taken place in utter solitude. A writer's work takes place far from an audience, and anyone seeking to understand Springsteen's work has to investigate those solitary moments. The most important of all those moments took place in the waning weeks of 1981 as he sat alone in his house in Colt's Neck, New Jersey, and wrote 'Born in the U.S.A.'..."

The most commercially successful album of Bruce Springsteen's career, Born in the U.S.A. has often been underrated by critics and hardcore fans. In this thoroughly researched book, Geoffrey Himes makes the case for the album being Springsteen's most successful marriage of romance and despair, comedy and drama, literary craftmanship and political engagement. Himes examines Springsteen's prodigious output during 1981-1984 and discusses why some songs wound up on Born in the U.S.A., some on Nebraska, others on Tracks, and others on no official album at all.

Geoffrey Himes has written about music on a weekly basis in the Washington Post since 1977. During that time he has also written about pop music for the Oxford American, Rolling Stone, No Depression, Paste, Jazz Times, and many other outlets. He won a 2002 ASCAP/Deems Taylor Award for Music Feature Writing. He lives in Baltimore.
Posted by David at 4:31 PM